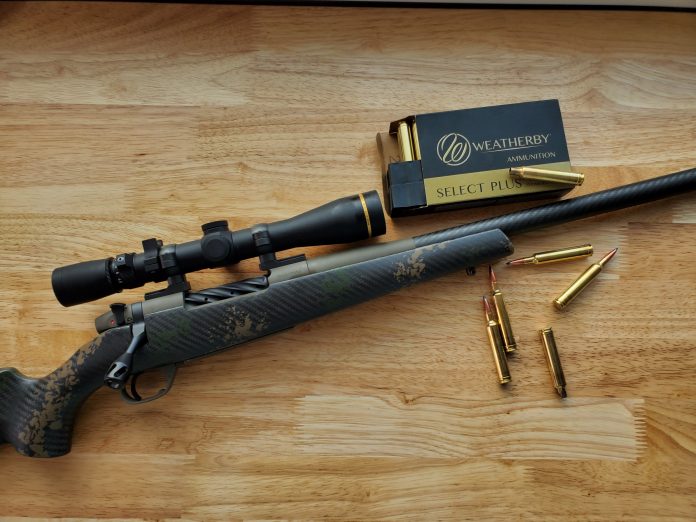 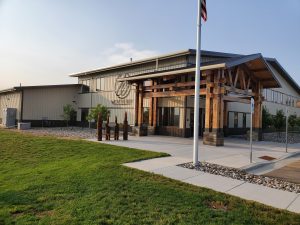 You rifle guys out there know all about Weatherby. The founder, Roy Weatherby was a bona fide firearms genius and national treasure. The story goes that Mr. Weatherby’s start to firearms fame began with a wounded deer in 1942. Because he never found that deer, he would spend the next ten years developing rifle cartridges he felt would be more effective for taking game. Roy Weatherby was a “wildcatter” a devoted handloader who delighted in coming up with new and innovative rifle calibers. He believed a fast bullet was essential for ethically taking game, some of his cartridges, including the .257 and .270 Weatherby Magnums, remain the fastest in their caliber class. While only a few of his creations went on to become commercially available, his signature line of Weatherby Magnums will forever have their place in the accurate rifle world.

Roy Weatherby would make custom rifles for many years before coming up with what would become his masterpiece, the Mark V rifle. This rifle was introduced in 1957 by Weatherby and was designed to safely contain the high pressures associated with the Weatherby line of high-performance cartridges. “Tomorrows Rifles Today” would become Weatherby’s motto.

With Roy Weatherby’s passing in 1988, his son Ed Weatherby took over the helm for Weatherby and ran the company for many years, Ed has retired, and his son Adam has taken the reins for the company.

A new day, a new home, new rifles, and more. You will forgive me (I hope) if I tell you I felt like pinching myself when I walked into Weatherby’s headquarters in Sheridan, Wyoming. The setting is beautiful with the Bighorn Mountains in the background. This facility was built in 2018 with 60,000 sq. ft. of manufacturing space and 15,000 sq. ft. of office space, the 125 employees of Weatherby have room to build lovely bolt action rifles. 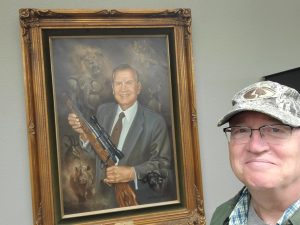 Larry Case with Roy Weatherby painting at the Weatherby HQ.

The historical displays made me feel as if I stepped back in time. I could not help but think about that skinny kid I have told you about lying on the floor reading Outdoor Life and soaking up stories from Jack O’Connor. I immediately recognized pictures I had seen back in the day of Roy Weatherby displaying Mark V rifles along with the likes of John Wayne among others and different trophies taken by Mr. Weatherby including some huge bear skulls. I admit I wanted to linger here but the tour proceeded into the factory itself. 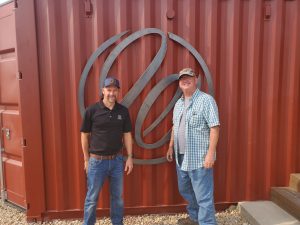 Adam Weatherby (R) and Larry Case on the Weatherby range near Sheridan, Wyoming.

The tour was given by Adam Weatherby, and I don’t think I was the only one present that was impressed with this new CEO of Weatherby. Adam seemed to have an infinite knowledge of every aspect of the company and every detail on the factory floor. Adam presented it all with a machine gun like delivery and soon I felt a little overwhelmed. I wanted to absorb it all but knew I couldn’t all at one time, finally I decided to just enjoy it get details later. This is one boss that knows what’s going on the factory floor! Every station we stopped at Adam knew the person’s name working there and what they were doing, in detail. I realized I was getting the feeling that these workers were building rifles by hand, one step at a time. The pride in craftsmanship these men and women felt was obvious from the start. 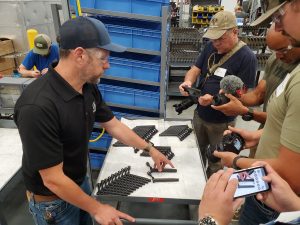 Adam Weatherby on the factory tour. 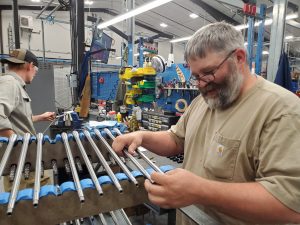 Weatherby worker at a barrel station.

Well, I have gone on too long as usual, but I need to tell you about the real news here, the new rifles and products coming from Weatherby.

A new Mark V rifle, the Back Country 2.0. This an ultra-lightweight big game rifle that starts at just 4.7 lbs. (4.7 pounds!) and much of the credit is owed to the new Blacktooth carbon fiber stock from Peak 44, (made at the Weatherby factory) the lightest version of which tips the

scales at under 20 ounces. This new Blacktooth stock features the Rock Solid Carbon Link bedding system which engages the recoil lug and evenly distributes recoil throughout the stock without the weight of a traditional aluminum bedding block, making the overall stock both lighter and stiffer. Available in four configurations and a multitude of chamberings, the new Backcountry 2.0 comes with a steel receiver and the new Backcountry 2.0 Ti comes with a strong and lightweight titanium receiver. 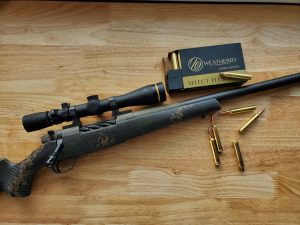 To mitigate recoil, years of development have resulted in a new generation of the revolutionary 3DHEX recoil pad. This one-of-a-kind pad is the first in the industry to be 3D printed at a production level. Using a three-dimensional honeycomb pattern of collapsible voids, it draws out the time component of recoil taking away the sharp kick. With the same amount of recoil spread out over a much greater time period, felt recoil is greatly reduced, even with some of the fastest cartridges on the market. After an excellent long range course given by Thompson’s Long Range Shooting, we were hitting targets at 1,000 yards with ease with the 6.5X300 Weatherby. (My new favorite caliber)

If you are a rifleman, this is huge. Weatherby has a new rifle, a new stock (which I am told they will be making for other rifle brands) stay tuned and go to www.weatherby.com for more information.

Well good grief, I forgot to tell you about the new 20 gage Orion shotguns Weatherby introduced, and I wanted to talk about the wonderful little town of Sheridan. (Maybe next time) When I flew out of town on Friday it dawned on me Roy Weatherby’s old motto of “Tomorrow’s Rifles Today” was still in place and perfectly suited for what Weatherby is doing today. 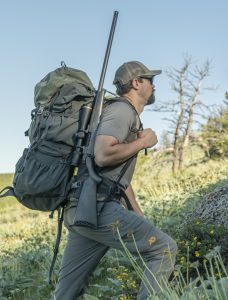 Larry - March 16, 2021 0
Let's talk about boots a little bit. I have said for years that in the hunting and fishing and outdoor realm, you can live...

WHY YOU SHOULD START SQUIRREL HUNTING