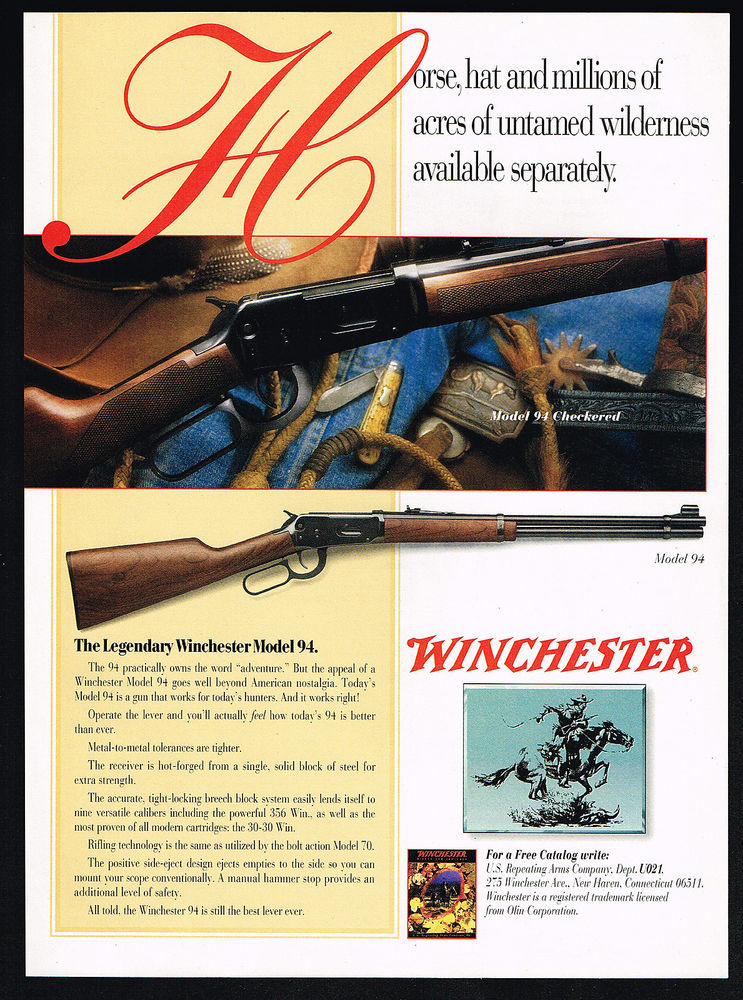 Were it not for the Winchester Model 1894 rifle, and more specifically those chambered in .30/30 Winchester caliber, deer hunting in America might not be the same today. That’s a pretty bold statement and one that many will scoff at, but we have to start somewhere.

No other rifle in history would become as iconic, at least for deer hunting, as the old Winchester 94. Indeed, for several decades if someone referred to a “deer rifle” to most hunters this meant the tried and true lever action Model 94. If you have a Dad, Great Grandad, or even a Great-Great Grandad that deer hunted, it very possible that you have a Winchester Model 94 in a gun safe or closet somewhere. Over seven million Model 94’s were produced and sold.

The Model 94 was conceived in the drawings of the firearms genius we talk about here fairly often, John Moses Browning. Seemingly every well-known firearm from the past century came from the work of Mr. Browning. Browning may be best known for inventing automatic and semi-automatic firearms (the Colt 1911 pistol and the Browning Auto 5 shotgun to name only two) but the Model 94 has been called the ultimate lever action design by more than one firearms historian.

The Model 94 was produced continuously by Winchester from 1894 through 1980 when the production of the gun was taken up by the U. S. Repeating Arms Company which made the Model 94 until 2006. Reproductions of the rifle are now made in Japan and imported by Browning Arms Company. While the Model 94 saw service in both World Wars with various divisions of the US, French, British, and Canadian armies, it was in the American deer woods that the 94 achieved its greatest fame. East of the Big Muddy where dense brush, close range shots and fast moving whitetails are the usual drill, the Winchester came into its own. Light in weight to carry, a carbine like length, and the ability to get off fast follow up shots made it the deer hunter’s favorite for decades.

In 1964 Winchester made the decision to lower manufacturing costs on the 94 and this led to several changes in the parts and materials of which the 94 was constructed. While the outward appearance of the rifle was much the same, (except for the receiver on the new rifles that did not accept the deep blued finish as well as previous models) and the new version was accurate and functioned as well as before, Winchester fans saw the change as heresy. Gun buyers now noted a difference in rifles made “pre 64” and those that came after. Pre 64 model Winchester 94’s still bring premium prices compared to those manufactured later. The same goes for the Winchester Model 70 bolt action rifle.

Almost all of us shoot a rifle better with a well mounted scope, a telescopic sight, than we do with open sights. Even though mountains of deer were taken with the 94 and open sights, as the production of quality, affordable scopes became more and more common, this is what hunters wanted.

Here is where the 94 had a problem in design. The rifle had always ejected the spent cartridge from the top of the receiver; this sent the brass straight up and usually over the shooters shoulder. As long as we used the open sights, no problem, if you wanted a scope installed, big problem. Side mount scopes could be employed (several problems there, I never liked them) or a scope could be installed farther forward on the barrel. There are actually more “guide mount” types scopes available now which will work in this fashion. In 1982 Winchester changed the design of the Model 94 and allowed for an angle ejection of the brass and thereby the mounting of a scope on top of the receiver. A good idea but it was too little too late and in 1989 U. S. Repeating Arms gave up the ghost and was sold to Belgium gun maker FN Herstal.

FN actually made some good changes in production methods on the Model 94 but they did something else that Winchester Model 94 devotees saw as the end of civilization as we know it. Almost surely from the demands of their legal staff, in 1992 FN produced Model 94’s with a new crossbolt style safety instead of the traditional “half cock” feature on the hammer, and the world has never been the same. Gun owners, hunters, gun writers and others loudly protested this abomination. FN later moved the safety to a much less obvious tang mounted version and most of the fury was quieted.

I’ve always had mixed feelings on the 94 safety debacle. While I loved this old rifle as much as anyone, I have seen it involved in some dicey situations when it came to accidental discharge situations. The problem with the old design comes from when the lever is moved downward, the hammer is moved back into the cocked position. As the lever comes up, the new round is chambered and the rifle is ready to fire. This how it should be unless the shooter has his finger still on the trigger, if he does the rifle goes boom.

More than twice I saw hunters with Model 94’s have accidental discharges. This was usually while trying frantically to unload the rifle in a vehicle because they saw the game warden (me) approaching. Just in case you didn’t know a high powered rifle going off in a truck is extremely loud! Like many others I did not like the crossbolt safety on the 94, but I could probably live with the later tang mounted version.

We can’t return to the days of old when deer hunting wasn’t so much about heated shooting houses, food plots, trail cameras, and bucks that we have named since they were one year old. Back then it was red Woolrich coats, inadequate
boots, wishing for a good tracking snow, and your old partner the Winchester 94. We can’t bring back the old days of deer hunting, but like me you can take your Dad’s old 94 out for spin this November. Remember folks, keep that 94 clean, your knife sharp, and take a kid hunting!

Larry - August 23, 2022 0
In last week’s episode you may remember our hero and his friends were trapped in a box canyon and the bad guys were shooting...
Larry - November 10, 2020 0
Deer Camp Memories November means two great things happen, Thanksgiving and deer firearms season. It’s time for deer season. It only comes once a year...