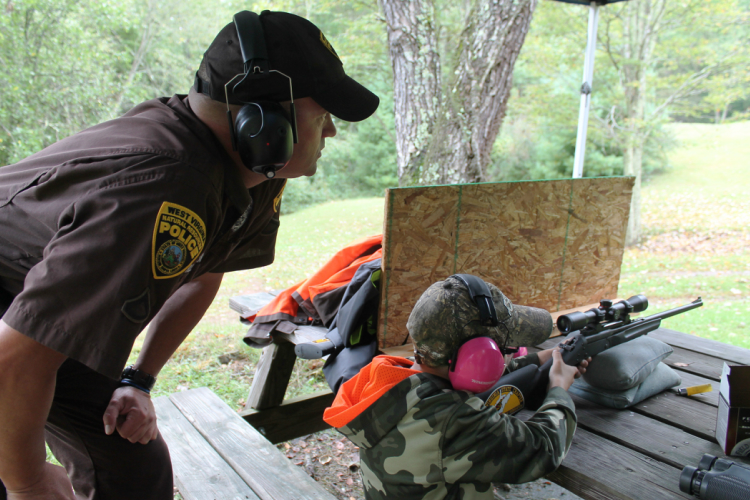 The little girl was about six years old and cute as the proverbial button. Decked out in a pink T shirt, pink trimmed ball cap and sparkly sandals, she was blazing away with a Daisy Red Ryder BB gun. The young man next to her was about eight and he had on full camo, Mossy Oak head to toe. Both were shooting the BB guns at paper targets in the air rifle booth at a JAKES Day event at Moncove Lake in Monroe County, West Virginia. Both of them were having a ball.

Just in case you have been living under a rock or maybe you have been caught in a time warp, let me bring you up to date on something. Things ain’t like they used to be. The total numbers of hunters and fishermen in the US of A are not what they once were. Depending on what study you choose to look at our numbers may be up a little after many years of a downward trend. While that is good news the days when you could show your high school football coach your new shotgun standing in the school parking lot are long gone. What a shame.

The whys and wherefores of decreasing hunter numbers have been the topic of much discussion in recent years. Folks today are involved in too many other activities, we don’t have access to hunting ground as we did in the past, kids today are more interested in computer games than being outside, even that there are less dads at home to teach such things, and the list goes on.

Whether it is all of the above or one certain reason for our ranks of hunters declining, one thing is certain. If our hunting heritage and culture is to continue there is a great need for something to introduce our young people to hunting, fishing, firearms, and the outdoors. How do we do this?

The National Wild Turkey Federation (NWTF) saw this need coming several years ago. One of the premier conservation based groups in theUnited States; the NWTF is dedicated to the conservation of the wild turkey and the preservation of our hunting heritage. Since 1973 the NWTF has worked tirelessly toward these goals and along with state and federal wildlife agencies can take much of the credit for the dramatic comeback of the American Wild Turkey.

Xtreme JAKES offers youth ages 13-17 opportunities and challenges more in line with their abilities and experiences. Xtreme JAKES learn to be responsible outdoorsmen and women through fishing, camping and other outdoor activities. They learn to identify plants and animals, as well as how to effectively call in those elusive toms through hunting seminars taught by experts in the field. 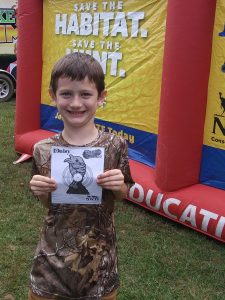 The JAKES Take Aim program presents opportunities for youth ages 17 and younger to try target shooting, clay target shooting and shotgunning in a safe, fun environment. NWTF state chapters in the lower 48 states have a fully equipped air gun trailer to use during local JAKES and youth events. The trailer contains everything needed to set up an indoor or outdoor air gun range.

I was able to spend a few minutes with Cully McCurdy, Regional Biologist for the NWTF and a Monroe County native. Cully was hip deep in youngsters waiting their turn at the air rifle station but he took some time to tell me about the JAKES program.

“It could be that a lot of people don’t know this,” Cully said, but the NWTF JAKES program is second in the nation for exposing young people to shooting sports and outdoor education, second only to the Boy Scouts of America.” “That is quite a feat.” I agree!

“In our national outreach program, the NWTF is big on the three “R’s,”” Cully told me. That is Recruitment, finding and bringing new hunters and shooters into the fold, Retention, helping present day hunters to stay interested, and Reactivation, helping those who may have gotten away from hunting and the outdoors to see what they have been
missing and return to their old love.

If you are a turkey hunter but not a member of the NWTF, you need to join. If you are thinking of trying turkey hunting, or even someone who professes to enjoy wildlife, you need to join the NWTF. Find a JAKES Day event near you and haul your kids over to it. If you don’t have any kids of your own, go borrow a couple and take them to a JAKES Day. The kids, and you, are going to love it.

‘Legends’ of the fall

Larry - January 29, 2016 0
Maybe you have noticed this. Lately it seems people are pretty loose with the term “legend.”  I mean, it would appear anybody and everybody can...

Larry - August 29, 2018 0
My partner and I looked down on the hunter lying on the ground before us. He had a bullet wound in his lower back...

Larry - November 16, 2017 0
By Larry Case “Trespassers will be shot, survivors will be prosecuted”-No trespassing sign Besides what caliber makes the best deer rifle, whether the spring gobbler season...

Thanks for the Stories and the Laughter, Patrick McManus

Larry - January 16, 2019 0
The Kingfisher is a crazy bird. They fly erratically, have a call which may be described as a cross between an injured chipmunk and...