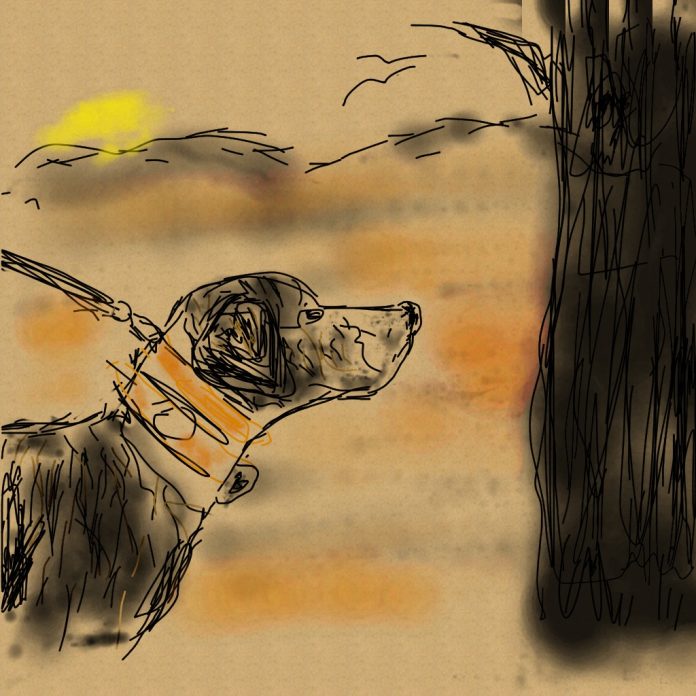 “Hey boy, that there is a Cur dog”, Raymond Taylor said when they stepped into his shed. Under the work bench, on a pile of old rags and newspapers lay a canine visitor he had never seen before. It was a little female and she slowly got to her feet and took two steps from under the bench. She looked up at them, but with head down like she had been caught doing something wrong.

“Don’t look like much to me”, Joey said, hands in his ragged overall pockets and his usual defiant mode. Raymond studied the dog for a moment; she was dirty and half-starved no doubt, but this dog was not just any mongrel. This dog had to be from Mountain Cur stock, maybe even papered. Where could she have come from? He didn’t know anyone within forty miles of here that had dogs like this.

Raymond eased forward and offered his hand to the brindle and white dog to smell. She cowered a little more but very carefully raised her head and gave his fingers a cautious sniff. “We’ll get her a bite to eat and see how she acts then”, Raymond said, half to himself. Joey had already lost interest in the dog, and as usual was digging through some junk in the corner of the shed. “You gonna keep her?” Joey said suspiciously, he had two old knife blades in his hands that Raymond had never finished.

Now Raymond paused and inspected the young man before him. Twelve and a half years old, towed headed and almost handsome if you could see past the dirt and grime that usually obscured his face. He was the son of the Wilson girl that lived a half mile down the road. Raymond had never asked about the boy’s father.

He thought of the night that the state trooper knocked on his door, two o’clock in the morning. “Got this Wilson boy here,” the trooper said under the porch light, “He was with some older boys that got in a little bind, I don’t think he did much, but it was probably close.” “I can’t find his Mom and her daddy said he don’t want him.”

The trooper’s words hung in the night air, half question, half declaration. Raymond glanced at the boy on the porch, he saw the kid sometimes walking the road, always dirty, always that piercing look. Raymond gave the trooper a look that said “So why’d you bring him here?” the young policeman glanced down for a moment and said “You’re the closest neighbor”.

So Joey stayed here with him when his mother didn’t seem to be around, Raymond had heard all the talk about Joey’s mother and the pills that he thought of as a plague that was rotting this county from the inside out. He fed the sometimes ravenous kid, bought him a few clothes, got him to take a bath occasionally, and tried to teach him some manners, it was strained at times. He and his wife of forty years never had any kids of their own.

A week later he was walking from the shed and the Cur dog followed him two steps back. Joey confronted them at the big white oak in the yard, hands on his hips and that hawk like stare. “Old man Johnson down at the store told me you used to have the best dogs in the county, maybe the state”. Joey let that one hang for a minute then said, “How come you don’t keep dogs no more?”

Taken back, he stammered for a second then said, “Well boy, I just didn’t care about that no more after Eva died.” He felt the stab just to say her name, “I sold off the young dogs and when my old Poacher dog died I just didn’t want no more”. He felt the boy had made him fess up to a thing long hidden, a thing he did not want to unearth. Joey considered his answer for a moment then stalked away, giving no hint of his judgment.

Several days later he was in the shop and he heard a sound that startled him and brought him running into the yard. It was a sound that he never thought he would hear again. It was a child’s laugh; he walked around the barn to see if it could be true. The boy was throwing an old half deflated basketball he had found somewhere. The Cur dog would race over, grab the ball, and fly back towards the boy. When she got to the kid she would juke to the side and race away, this brought squeals of delight from the boy. Raymond was enthralled, but he backed away unnoticed so as not to break the spell. He glanced one more time at the dog and boy, then at the clouds above the white oak, could it be?

One morning at daylight he was dreaming about a dog treeing. The dog was barking good, but he couldn’t seem to reach the tree. As the sleep left him, he realized the barking was in his yard. He walked out on the porch and saw the Cur dog, feet on the white oak, telling the world like Poacher used to do. Joey stood behind the dog, eyes scanning the branches. When he saw Raymond he yelled, “She’s got a big fox squirrel treed, bring us a gun!” Raymond looked upon the two youngsters for a moment and thought he might take Joey and show up at church this Sunday.

In a rut about the rut

Larry - January 29, 2016 0
So we all know it's coming, right? Just like death and taxes and the hourly calls from telemarketers, it's a fact of life. Deer...