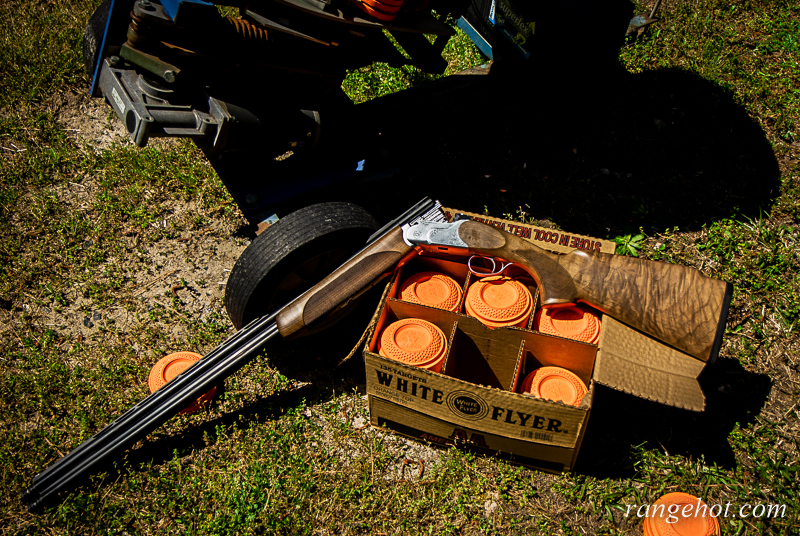 It was a few months ago I received the CZ Redhead Premier Target  to try out. Full discloser, I do not know a whole lot about formal sporting clays and such but I have spent many an afternoon busting clays in the back yard with friends. Now Candy with the Gun Powder Gals is up to speed on sporting clays, trap, and skeet so I enlisted her help in getting my feet wet. She took me to Drake Landing in NC for my first time and it was a great deal of fun at a beautiful facility. My final tally was busting 50% of the clay birds with Candy doing a little better. Not too bad for my first time. During the review, we also tried Five Stand and spent several afternoons just shooting clays out in the country.

The CZ Redhead Premier Target is a handsome shotgun that pointed well and was quite comfortable.

The Monte Carlo stock is turned from Turkish Walnut and laser-cut checkering.

The lever to break open the shotgun sits just above the manual tang safety. Incorporated into the safety is the barrel selector. This being a single trigger shotgun you select which barrel you want to fire first and upon recoil, the shotgun selects the other barrel.

Mounted to the very rib are two sights, while you more point a shotgun than aim it the duel sights white sights give you a quick reference point contrasting against the barrels.

The receiver is CNC machined from a single block of steel adding to the reliability and durability of a shotgun designed to shoot hundreds of thousands of rounds. The trigger broke at just over five pounds, on both barrels.

It ships with five extended choke tubes, cylinder, improved cylinder, modified, improved modified, and full.  That should keep you in business but if you want different or aftermarket chokes the sky is the limit, almost.  The shotgun comes in a nice carrying case and protective cloth bag.

The takedown lever is located where you expect on the bottom of the laser checkered forearm.

The shotgun comes with targets showing how both barrels will pattern.

The Redhead Premier Target is a fine example of an affordable sporting clays gun with features found of far more expensive shotguns.  We ran about 350 rounds through the shotgun and while that is not even a drop in the bucket it did give me and a few others a good idea on how the shotgun performs. As expected there were no malfunctions and I believe it something was amiss it would have shown up. While centered around the sporting clays, skeet, and trap this shotgun would serve well as an upland gun however not so much for taking medium game such as deer. This review was good for me in several ways as I got to learn quite a bit about sporting clays, experience the difference in a nice shotgun to some of the older guns I have shot skeet with, and I promise you there is quite a difference between a nice sporting clays shotgun and a budget gun. Candy had about as much time with the shotgun as I did and she actually shot it better than I did, as she had for more experience in that field than I. CZ offers a myriad of sporting shotguns so if you are in the market for a new shotgun or are thinking about getting into the sport CZ would be an excellent first step and I believe the CZ Redhead Premier Target to be a solid choice.