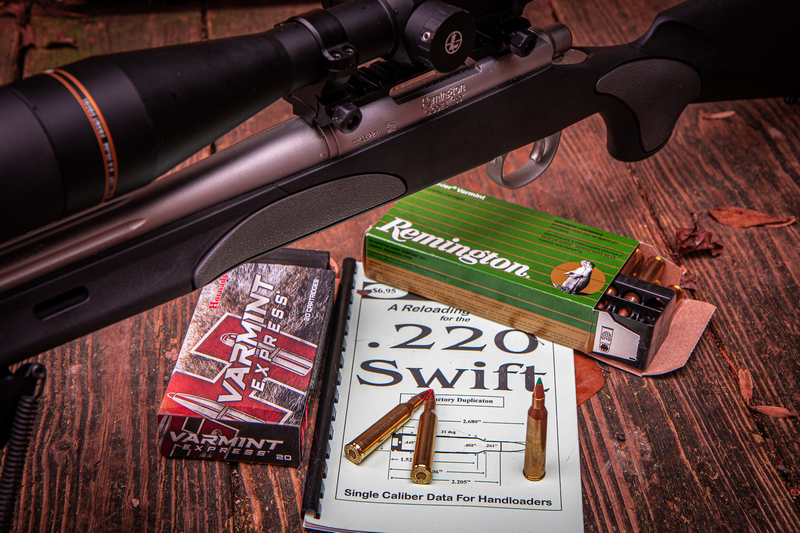 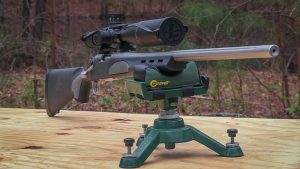 It was not that long ago I published an article talking about breaking in a rifle barrel, specifically a match grade rifle barrel. You can read it by following this link.
I used the Remington 700 VSF in .220 Swift for that article. A fine rifle to be sure in one of my favorite rifle calibers.  If you are scratching your head on my choice of caliber,
well sit back with your open mind, and let’s jaw about it.

To appreciate the .220 Swift, we need to go back some 86 years when the world was a vastly different place. A genius named Grosvenor Wotkyns got the idea to neck down the .250-3000 Savage to .22″ to push a .224 bullet to then unachieved velocities. I like to envision an intense Grosvenor Wotkyns in some dimly lit nondescript room, with all forms of loading equipment, manuals, and 1934 state of the art gauges working feverishly on his brainchild,  to push a .22 bullet to the 4000 feet a second mark and beyond. With backing from Winchester, the .220 Swift was created in that laboratory, hopefully, with some semblance to the Frankenstein monster drawing its first breath. The monster King of Speed was about to be set upon the world and many an unsuspecting varmint. The .220 Swift became available to the public in 1935 with the Winchester Model 54 bolt action rifle.

However, Winchester decided to abandon the .250-3000 Savage case and cut down and neck the then surplus 6mm Lee Navy case to offer the .220 Swift in a commercial capacity. The scuttlebutt is Winchester had way a plenty of the 6mm Lee Navy brass on hand as it was becoming obsolete with the US Army, so why not put it to use? When the famous Winchester Model 64 came to fruition in 1936, the .220 Swift was a standard caliber and remained so until that design was discontinued in 1964. The .220 Swift did indeed break that 4000 fps goal with the initial factory loading of a 48gr bullet pushed to around 4100 fps, the first commercial cartridge to break said barrier. When experienced handloaders got into the game, the factory velocities were surpassed, still within safe pressures.

The .220 Swift still holds the world’s record for velocity in a commercially available cartridge with a 29gr bullet making 4665 fps.  Look here, y’all that is flat out cooking.

There is no such a thing as a free lunch, and so with all that speed, well, you generate a lot of heat and barrel wear. It was not long the .220 Swift was labeled a barrel burner with some saying it had to be re-barreled in less than a thousand rounds and some even claimed in half that. 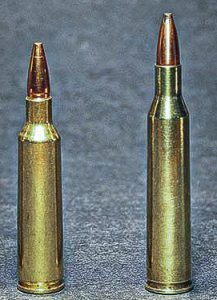 In 1963 the .22-250  made the transition from the 1937 wildcat to the commercial .22-250 Remington load due to the fact it was a bit easier on the barrel. The eclipse of the .220 Swift had been inevitable, and now it appeared unavoidable as new fast .22 varmint calibers were introduced. However, the Swift still had some advantages over the .22-250, such as velocity and, many say, accuracy. Due to the design of the long and slender .220 Swift’s case, you would have a great deal of surface area of the powder exposed to the ignition. This is conducive to a more complete and consistent powder burn, producing a more consistent velocity and a more consistent accuracy.  The twenty-eight-degree shoulder on the .22-250 is said to hold the powder longer in the case allowing a more complete burn, which is a bit easier on the barrel. In truth with the correct care, the barrel life between the .220 Swift and the .22-250 is very similar.

Fast forward to the upcoming years as metallurgy and propellant technology were advancing, the problems with barrel erosion became very less evident. Several other factors can mitigate barrel erosion; keep an eye on barrel temp, avoiding long strings of fire heating the barrel. Clean the barrel every fifteen to twenty rounds after break-in. Keep the velocities under 3800 fps when you can. I know, if you are going to keep your velocities under the 3800 fps, why even bother with the Swift? Well, when out having fun and punching paper, take it easy on the barrel, but if you need the horsepower, the Swift has that capacity. Having the ability is sometimes enough to justify case capacity. During my love affair with the .220 Swift have had had the opportunity to shoot with and talk to some old-time Swift shooters and fella that shot for real bench rest matches with the Swift.

Now we have explored the romance of the .220 Swift let’s talk about the Remington 700 VSF test sample. 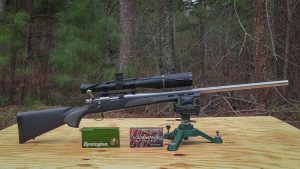 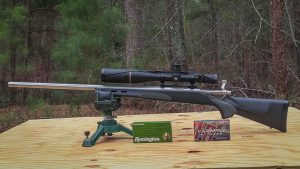 The VSF is an attractive rifle placing itself in the upper echelon of the Remington 700 line. 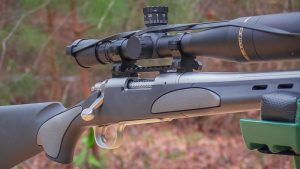 The trigger is adjustable for overtravel and broke clean around three pounds with little take-up and over travel. It has a four-round internal box magazine with a swing-away floor plate. That is advantageous for unloading the rifle without having to cycle the rounds through the rifle. The safety is on the right just behind the receiver and is a standard back is safe, and push forward is off. 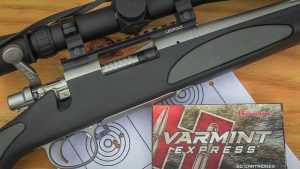 Stretched out to 500 yards, it took little effort to print three to three and a quarter inch three-shot groups with the same factory ammunition.

I feel confident if you have the glass such as the Leupold VX3i LRP 8.5-25×50 FFP and do your part; this is a 1/2 MOA gun with factory ammunition. 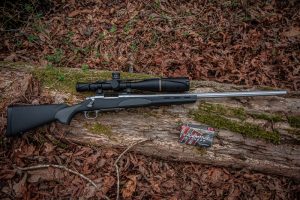 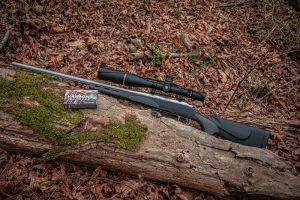 There is practical, and there is cool, but not always do those intertwine, but here we have that anomaly. Here we have a cartridge developed in 1934 that still holds the world record for the fastest commercial cartridge. Look here, it ain’t often such a boast can stand the test of time but couple that with an inherently accurate cartridge with still a cult following and you have the makings of the .220 Swift. The only cartridge I could find that would match the .220 Swift’s velocities in the world of .224″ is the .223 Winchester Super Short Magnum, but even with all precautions taken that cartridge burns barrels out in the order of 500 rounds or less. While the Swift has held on with one sharp claw, many have abandoned it for the new whiz-bang do all and be all cartridge that was introduced yesterday and probably yet another cartridge while I write this article, which is fine but we cannot forget what paved the way for the hypervelocity .224″ cartridges. I am not faulting manufactures for continuing to develop and introduce new cartridges my concern is all the new hype will overshadow older cartridges that are just as good or maybe even a bit better that should not fade into oblivion. The only manufacture I could find that is still building a rifle in .220 Swift is Remington, and they have done the round justice with the 700 VSR. Be unique, everyone shoots the .22-250, .223 Remington, .204 Ruger. Be that cat at the range with something different showing up those new calibers with for real speed. Something like lining up that homebuilt 1935 Willis Gasser and blowing the doors off some factory Porsche at the drag strip.

This is a work in progress so next is an MDT Chassis swap and some well-developed handlaods to see just how much accuracy can be squeezed out of the legendary Model 700.

Larry - February 16, 2019 0
https://youtu.be/vzGTYf4uq-U Dallas Nelson at TriStar Arms tells us about the TriStar Viper G2 .410 Camo. If you are looking for a moderately priced semi auto...