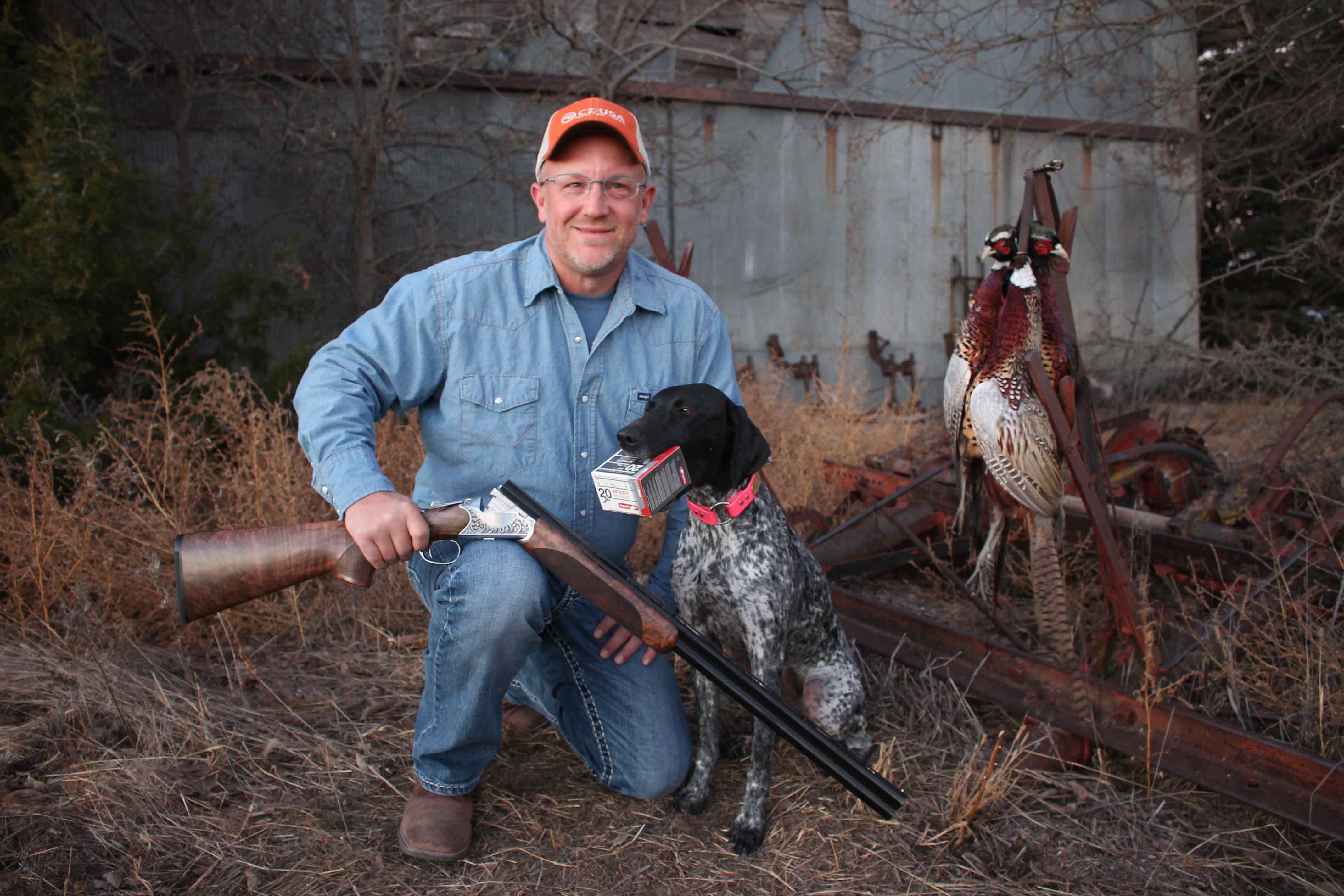 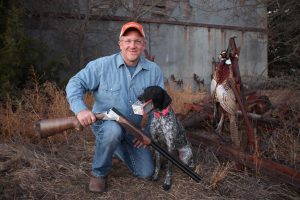 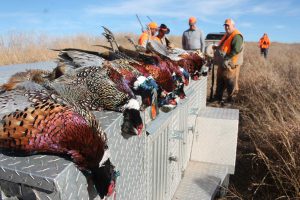 Rooster Pride, Pheasants, and CZ Shotguns on the Kansas Plains.

Dave Miller is sorting shotguns. This requires a lot of sorting because he is looking
at a lot of shotguns. The top of his customized dog trailer has a large
compartment and it is crammed with shotguns in cases, shotgun shells, (boxes
and boxes of Aguila ammo) dog training collars, blaze orange bird hunting vests,
and you name it for a pheasant hunting expedition. O yeah, a large storage box in
the back of his truck also has a bunch of shotguns, a lot more than in the dog
trailer.

We are on the windswept plains near Greensburg, Kansas and Miller, who is the
shotgun product manager for CZ-USA firearms is going full bore and it’s not even
nine o’clock in the morning. This guy lives, breathes, eats and sleeps shotguns.
Twelve and twenty eight gauges, bird dogs, shotgun shells and pheasant feathers,
it’s another day at the office for him. Standing there watching the ritual I want to
help, but I know I should probably just stand back and stay out of the way. I am a
stranger in a strange land.

I turn around and note that I have never seen this much flat land in my young life.
As far as I can see to the horizon, with not a tree in sight, can I see the curvature
of the earth? A huge field with waist-high dried grass and brush awaits our party
of ten or twelve hunters and six bird dogs.

After Dave Miller assigns me and others a CZ shotgun, we will line up and take the
field at a brisk pace. I can’t help but think about Pickett’s charge at Gettysburg.
The bird dogs, a mixture of English pointers, German Shorthair pointers, Springer
Spaniels, a Wirehaired Griffon, and a dynamo of a little English Cocker Spaniel,
swarm around us. Dog whistles blow, owners yell, some of the dogs listen, others
plunge into the day with the exuberance known only to a bird dog. The
excitement and anticipation fairly crackles in the air. The Ring neck pheasants are
out there somewhere, hunkered down in the brush. Will I be able to hit one if it
flushes in front of me?

It is not long into our advance before someone yells what I will hear dozens of
times before this wing shooting party is over, “Rooster!!” The male pheasant,
known as a rooster, is the legal game here, the female of the species, the hen is
not. So every time a bird gets in to the air someone will cry “Rooster!” to confirm
it is OK to shoot, if a drab colored hen pheasant gets up everyone yells “Hen!!”
The roosters are much gaudier with multiple colors and long tail feathers, but in the excitement of the chase it would be easy to make a mistake. I tell myself for
the third time to be careful. The dogs, in truth, do not care if it is hens or roosters;
they are working in front of us with a vengeance.

I soon learn that any pheasant that gets airborne in front of Dave Miller is in
serious trouble, I am not sure I saw him miss a bird the whole trip. It was much
the same for two of his bird hunting buddies present on this outing. Mike Hyde,
(known as the “Hammer” for his habit of hammering pheasants and clay targets)
and Mike Brennaka, (like Miller both hail from Missouri) both showed off by
dropping pheasants like a hot rock. And they did it with a 28 gauge shotgun! Did
you get that? A 28 gauge, smaller in size than a 20! I stuck with a 12 gauge,
figuring to hedge my bets.

There was group of wonderful people on this hunt and as usual I hope I do not
forget anyone. Besides Dave Miller and the “two Mikes” we had Anna Van
Nostrand, outdoor personality, and her wonderful German Shorthair pointers,
www.annavoutdoors.com Randy Lack, host for Outdoor Channel TV show Guns
Dog TV, Randy’s cousin George and their friend Bobby Blackwood (Bobby’s little
English Cocker Spaniel Pearl almost stole the show in the bird field. Also along
were Tom Nichols and Evan Pittman of Wolf Creek Productions who film gun Dog
TV. www.gundogtvshow.com

The ingredients for the recipe for this hunt are as follows. The outfitter was
Upland Inn Hunts at Greensburg, Kansas. Owner Jason Johnson has spent years
putting together a program of maintaining CRP fields, raising birds, and providing
comfortable housing and good food for his hunters and it shows. It’s all here,
everything you need for the pheasant hunt of a life time. (This place has a lot of
pheasants) www.uplandinnhunts.com

As usual I have rambled on too long and fear I do not have room to tell about all
the shotguns Dave Miller and CZ-USA had available for this hunt. I stayed with the
over and under and my second favorite was the CZ Wing Shooter Elite, this gun
comes in 12 or 20 gauge, 28 inch barrels, selectable single trigger, select ejectors,
and drop dead beautiful walnut stocks. So what was my favorite? I can’t tell you!!
CZ-USA is going to unveil a new hunting shotgun very soon and it is a dandy. (it’s
an over and under and you are going to like it) Also in the field was the popular
Upland Ultralite, a six pound 12 gauge shotgun, and the old standby the CZ Drake
among others. Dave Miller just to show he could shot the CZ Swamp Magnum
over and under a shotgun conceived to be a waterfowl gun but is very utilitarian in its possible uses. Instead of me trying to explain all the CZ-USA shotguns
available to you stop by www.cz-usa.com and shop around, I think you will be
pleasantly surprised. You also need to check out Aquila ammunition, who make so
many varieties of shot shells I would be here for a week telling you about them.
www.aguilaammo.com
So how did I shoot in this foreign setting? The first two pheasants that rose before
me came up together and I downed them like I had been doing it all my life. (I
think the pheasants were more surprised than me) After that, I thought I was
going to give Dave Miller competition and even began giving those in line next to
me shooting tips. (Pride goeth before a fall) After this of course, for some time I
could not have hit a flying elephant, if he was flying towards me.
If you have never been pheasant hunting go to Kansas, give Upland Inn Hunts a
call, take a CZ-USA shotgun and your favorite bird dog.
Leave your pride at home. Thanks for another life lesson Dave Miller.
larryocase3@gmail.com