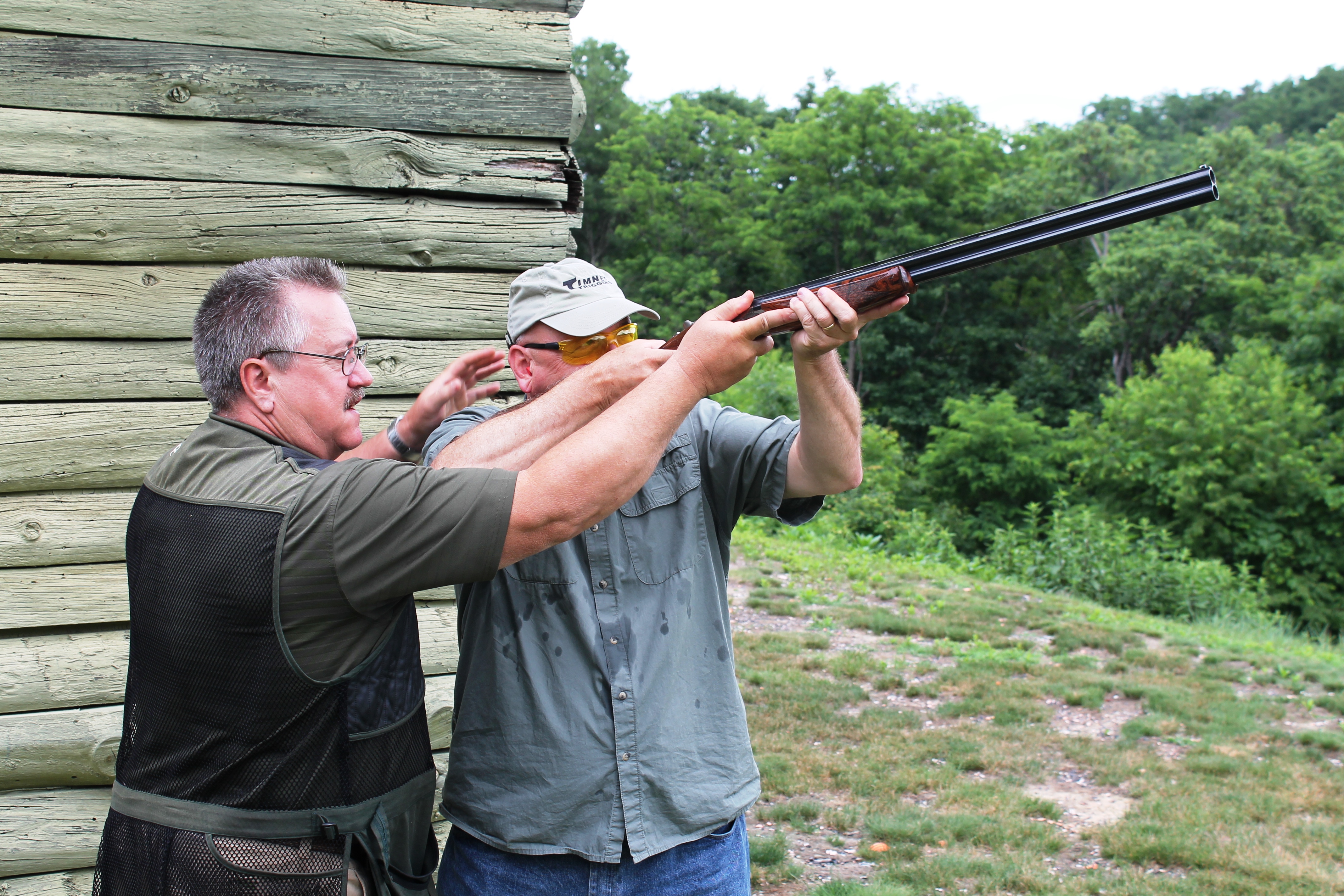 GET A SHOTGUN THAT FITS AND LIVE BETTER

“This gun shoots where you look” he said, handing down a well-worn A-5 from the rack. The wiry little mountaineer studied me as I took the shotgun to my shoulder. Knowing I was being scrutinized, I feared I would be found wanting. He was the last of the old time, dyed in the wool grouse hunters from my youth and I craved his approval and feared his wrath. Then he softened a little and said “Well, what I mean is, it shoots where I look, we ain’t exactly built the same.”

This was my first glimpse into the mystical world of shotgun fit. Like many of us, early on I was handed a shotgun and was expected to shoot it, no complaints. Complain? I wouldn’t have complained if the gun weighed more than me and kicked like the proverbial mule (which they often did).

Just like bullet trajectory, barrel length, and how to best sight in your deer rifle, shotgun fit persists as one of the shrouded mysteries of the gun world. It doesn’t have to be that way. Knowing how to properly fit a shotgun is not equal to the science of rockets.

Finding your point of aim. It is important to understand that the shooters dominant eye is the rear sight of the shotgun, so when we mount a properly fitted shotgun, the gun is “shooting where we look.” What we are going to check here is your “point of aim”, and just like skinning felines, there is more than one way to do it.

First, with the shotgun unloaded and held in a “ready” positon pick an object for a target and focus on it. Close your eyes and mount the shotgun at a deliberate speed. Ideally, if the gun fits you when you open your eyes you should be centered on the target. In a similar method, again with the gun unloaded, have a friend stand about five feet in front of you as you aim the shotgun at his nose. Looking down the barrel or rib of the shotgun the friend should see your dominant eye in the center of the barrel, not off to either side. Your friend should see the pupil of your eye sitting on top of the rib, if your eye is below the rib, the comb of the stock is too low, if your eye is above the rib, the comb is too high.

In a perfect world where everyone is rich and beautiful, we would all go to an expensive gun fitting guy and he would do all of this fitting for us. What most of these professionals do is put you on a “try gun”, that is a shotgun with an adjustable stock. Comb height, length of pull, and pitch on the buttstock can all be altered to fit you. The gun fitter will have you fire at a pattern board or a steel plate as he adjusts the various places on the stock. If you are not rich or beautiful, you can do a lot of this fitting on your own.

On a safe gun range hang up a bed sheet or a plastic table cloth and mark a four inch aiming point in the center. Insert a modified or tighter choke in the shotgun and stand about 15 yards from the target. Focus on the aiming point, bring the gun up smoothly and fire the instant the gun comes to your cheek. Now this part is important, do not try to correct your aim or look at the bead on the shotgun. We are trying to determine your point of aim and the shooters eye is the rear sight, remember? Equally important here is to remember the gun must be mounted consistently each time in the same place.

Continue to shoot (usually 3-4 shots) until you see a hole appear in a certain location. This is your shotguns “group” if you will. If your shotguns group appears above or below the centerline of the target, you will need to adjust the drop on the stock, so let’s talk about that first.

Most problems here deal with drop at comb; you can raise the comb by applying a self-adhesive mole skin material, (such as Dr. Scholl’s) building up the surface of the comb until you reach the height you need. Lowering the comb usually means taking material off the comb, with a wood rasp and sandpaper; this is best done by qualified stock maker/gunsmith.

I once witnessed an overzealous shooter at a high end shooting club who was told by his instructor the comb on his shotgun was too high. Taking all that the instructor said to heart, the gentleman showed up the next day with his shotgun which he had worked on during the night, with a piece of broken glass. The gun probably cost him more than my house but his workmanship left a little to be desired.

A quick fix for lowering the comb a little is to simply lengthen the stock. This doesn’t change the comb but in effect it gets you farther back on the slope of the comb and lowers you check a little. Another little trick for lowering the comb is easily done on most pump guns and semi autos. Loosen the bolt in the stock and place a very thin shim where the head of the stock meets the receiver, and then tighten the bolt up. Very thin is the key here as even a flat toothpick can change the drop of the gun over a half an inch.

Length of pull. Length of pull on the shotgun is measured from the front of the trigger to the center of the butt of the stock. To determine if the gun has the correct length of pull for you mount the gun and measure the distance between your nose and the knuckle of your thumb, it should be 1 ½ inches, which is about two finger widths. If it is more than that, the stock is too long, if the measurement is less, the stock is too short. Remember any adjustments should be done in very small increments

Cast on and cast off. Cast is simply a bend in the stock of a shotgun designed to put your dominant eye directly over the rib. If drop is the elevation adjustment on a shotgun, cast is the windage. Left handed shooters need “cast on”, a bend to the left. Right handed shooters get “cast off”; the stock bends to the right.

A shooter with a thin face can often shoot a shotgun with no cast just fine. Shooters with a wider, (fatter) face may need cast to get on target. Most production model American made shotguns have no cast; the stock is straight, while many European shotguns are made with cast. Once again with a flat toothpick sized shim we can adjust the cast on pumps and semi-automatic shotguns. Place the shim on the head of the stock opposite of the side you want the bend, so a right handed shooter would place the shim on the left side to get cast off.

Pitch and Toe. Pitch on the butt of a shotgun is simply the angle of the butt relative to the barrels. The toe is the bottom of the butt on the stock, and gun fitters refer to “toe out”, which means bringing the toe away from its original position. To be honest most American shotgunners know little and care less about these two areas on a shotgun stock.

Closer attention to these two little known details on a stock however, will often make a shotgun much more pleasant to shoot. An easy way to experiment with these two items is to loosen the recoil pad and place quarters under there for spacers. In this way you can quickly change the pitch or bring the toe “out” and determine what suits you best.

Maybe you are one of the lucky ones. When gun makers started mass producing shotguns over one hundred years ago, we are told that the average size man was about 5’9” and weighed 165 pounds. If that is you, congratulations, most of the shotguns that come out of the box might fit you. If you differ from that size at all however, you will need to learn a little about gun fit.

Today there are several gun companies that include different built in stock adjustments for shotguns, Benelli, Browning, Beretta, Mosseberg, and Remington included. CZ-USA makes all of its wood-stocked shotguns with cast off for right handed shooters, so there are some choices out there.

Here is what I suggest. You made all of these adjustments on your shotgun right? Moleskin on the comb, toothpick between the stock and the receiver, quarters under the butt pad, the whole nine yards. Take this gun along with your original target that you shot for a “group” to a qualified gunsmith/stock maker, leave the gun with him to measure and fit to you properly.

My old grouse huntin’ buddy was right about this, all those many years ago. We are not all built the same and you want a shotgun that shoots where you look.

Bend some Twigs at JAKES Day.

Larry - September 19, 2019 0
The little girl was about six years old and cute as the proverbial button. Decked out in a pink T shirt, pink trimmed ball...