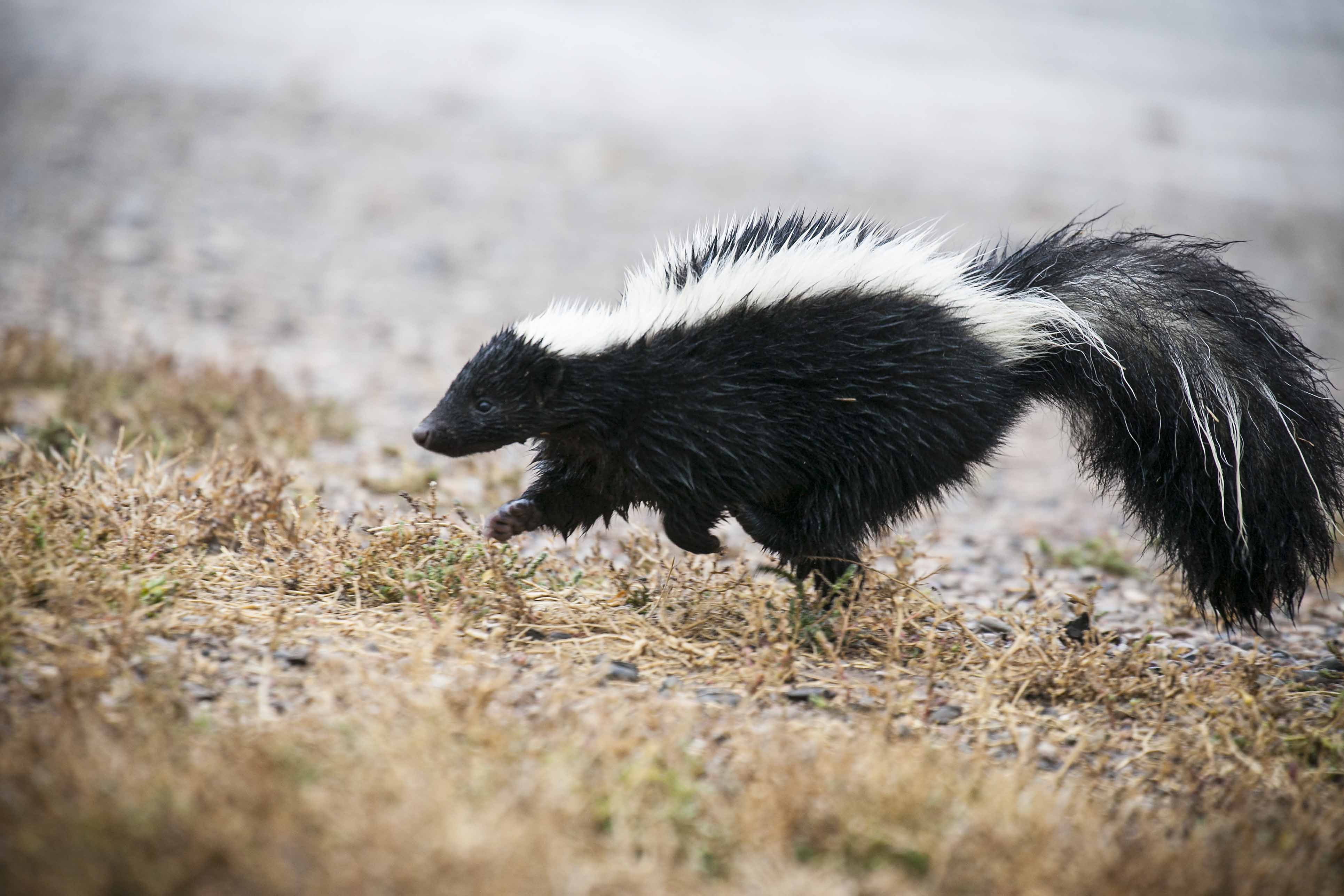 Like all mortal men I knew this day would come. Somehow we all go through life and pretend it will never happen to us. The years go by and we try not to think about it, but then one day, one awful day, there it is. Death? No, don’t be silly. I’m talking about the first time your dog encounters a skunk.

Most people don’t think about skunks much, which is probably because they have never met one. After snakes, skunks may be my least favorite creature which roams upon the earth.

Skunks are actually quiet little varmints and don’t draw much attention or cause a lot of trouble. That is, until your hunting dog gets in their personal space. When this happens, you may wish you had taken up golf, or been more serious about bowling or hang gliding, anything besides hunting with a dog.

For those of you who don’t keep up on such things maybe a quick lesson on our fragrant friend the skunk is in order, kind of a Skunk 101.

For classification purposes, skunks for many years were considered a member of the weasel family (Mustelidae) — cousins to more celebrated creatures like the mink, weasel, otter, marten, fisher, and the big daddy of them all, the wolverine. In recent years scientists have reclassified skunks into Mephitidae along with a wonderful little animal known as the stink badger. The skunks are evidently not too happy about this figuring their reputation has suffered enough, and I am told they have filed a lawsuit.

Be that as it may, the skunk is best known for his main defense weapon, two scent glands located in the skunk’s well, posterior, which are capable of spraying their foul scent accurately over 10 feet away. The scent is made up of a mixture of sulphur and a group of chemicals known as thiols, which are also known for their strong odors. Put them all together and somebody will smell a skunk.

A blast of skunk scent can be overwhelming and may cause temporary blindness if spayed in the eyes. We humans don’t really have a well-developed sense of smell but we can detect skunk scent over three miles away. The skunk’s spray is his only defense weapon and will repel all potential predators except for one, the Great Horned Owl. This owl commonly dines on filet of skunk and you have to figure anything that will eat a skunk is one bad dude.

So now you maybe have the picture of why running into Mr. Skunk is so potentially traumatic for your canine buddy, and you.

Last week I was tramping over the steep hillsides here in my part of the Appalachians. My companion this day was a certain brown dog by the name of Beau, AKA Beau the Wonder Dog, because often I am wondering where he is. Beau is 13 months old, of bird dog heritage, and runs like the proverbial deer.

Not long after leaving the truck I was watching Beau traverse the landscape and to my dismay watched him run headlong into a medium sized skunk. Beau seemed to make it clear he wanted to get acquainted; the skunk did not. I implored Beau from a distance to stay away from this newfound friend, to no avail. The skunk stayed with standard procedure for skunks, tail held high, business end aimed at dog.

I knew what was coming and saw Beau turn his head with a look on his face that seemed to say “Holy toxic waste Batman! What was that?”

Now my dog had no problem parting ways with the skunk and returned to me. I steeled myself for the assault on my senses.

If you have never been witness to a dog that has just received both barrels from a skunk, or worse been sprayed yourself, it can be hard to describe. The smell seems to take on a living entity of its own. It is a physical presence and may seem like hitting a wall, a wall that engulfs you in its choking stench.

I now had a mission and I knew the quicker I did it the better. Getting the dog in the back of the truck was ticklish business but we were soon headed home and thankfully it was a short trip. Now came the part of the ordeal which Beau may have thought was worse than the attack of the skunk.

I launched into a full scale assault on the stink that was clinging to my cringing canine. Conditions and temperature were not exactly primo for a bath in the yard but that is what we did. Beau expressed his distaste for this activity several times but we plowed on and accomplished the mission.

This part is important. If you find yourself in this predicament of needing to scrub your dog, here is what you use. In warm water, concoct a mixture of baking soda, hydrogen peroxide, and dishwashing detergent. People who seem to know report the baking soda and peroxide work together to neutralize the skunk scent.

Scrub the doggie well with this and leave it on him for a few minutes, rinse and do it all over again.

It worked well on Beau the Wonder Dog. Forget about the tale you have heard on bathing you dog in tomato juice, use the baking soda and peroxide.

OK, I hope this helps any pilgrims out there that may be afield with a canine partner this year. Tell your dog to stay away from skunks. Any relationship with them just plain stinks.