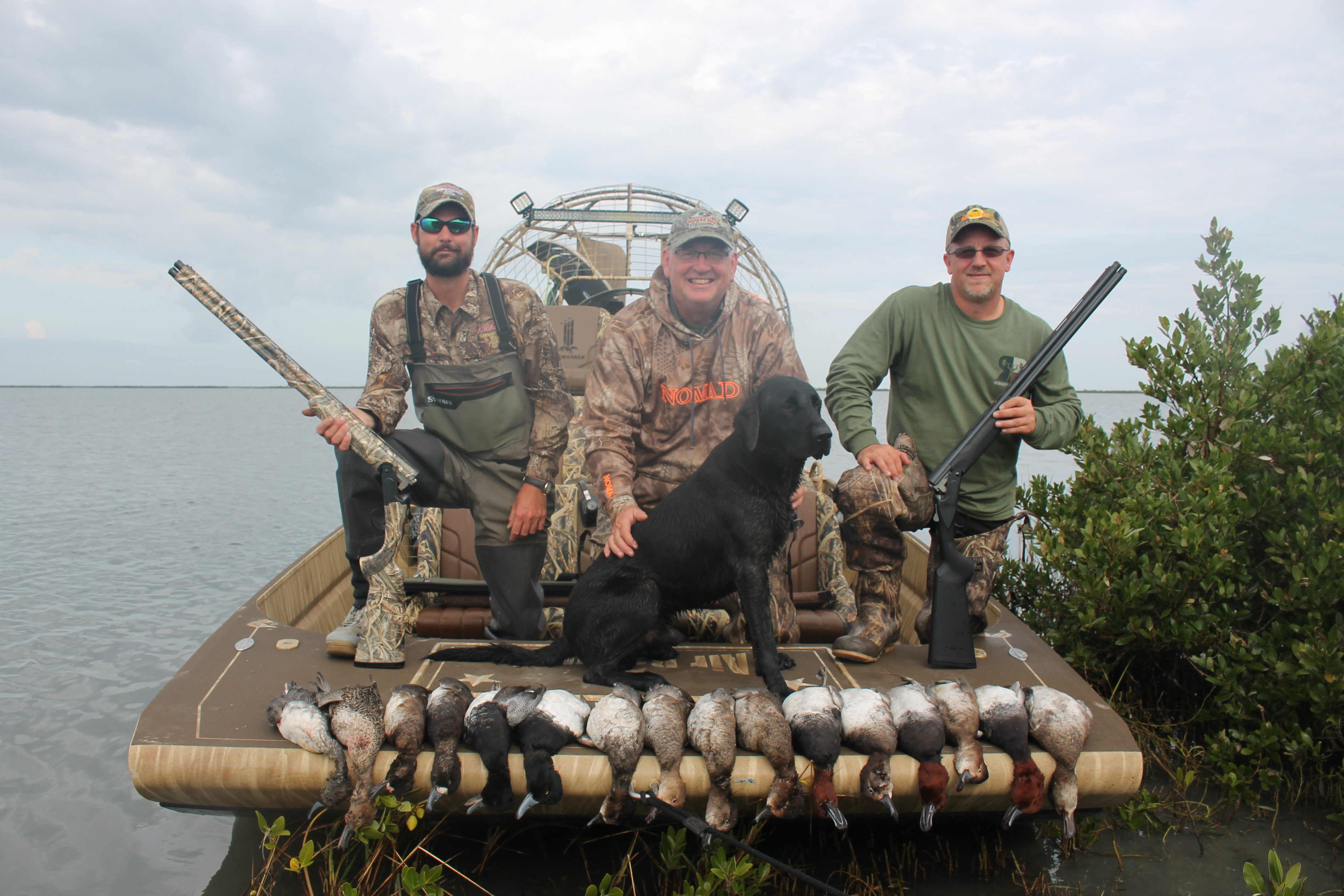 The whole thing seemed to start innocently enough. When I got the phone call from Dave Miller I honestly did not suspect a thing. I had just arrived at my fortress of solitude in the hills looking forward to a few days of chasing turkeys and squirrels and maybe get a little writing done. (Maybe)

Mr. Miller as you may recall is my shotgun buddy at CZ-USA. He is the Shotgun Product Manager and exhibition shooter for them and shoots a shotgun like most of us wish we could. Besides being a master class clay target shooter, last year he set a Guinness Book of World Records for the most clay targets broken with a shotgun in one hour, a mere 3,653. Need I say more about his qualifications?

Anyway, Dave proceeds to tell me on the phone that an opportunity has come up last minute for a trip to the Texas coast to duck hunt and fish for redfish, big redfish. So I told him “I dunno Dave, I will have to think about that, OK, count me in!” Boom, just like that I am on a plane to Houston Texas to meet Mr. Miller.

Little did I know at that very moment a clandestine meeting was going on in a dark, smoky room in southern Texas. (OK, I might have made up that part about the smoke, but it was dimly lit.)

“OK guys, here is the skinny on our next job,” Vence Petrenella, one of our hosts said. Vence is conservation and wildlife manager for Silver Eagle Distributors and hunts and fishes all over Texas. Assembled before him was James Prince, manager of the Shoalwater Bay Club, a private resort in Port O’Conner, Tim Soderquist, a regional director for Ducks Unlimited, Randy Risher, President of the Risher Companies, a fitness and fitness equipment company, and Kevin Glass, Lt. Game Warden for Texas parks and Wildlife.

“Dave Miller from the gun company CZ-USA is coming down to duck hunt and fish for bull reds,” Petrenella told his band of co-conspirators. “He’s bringing some guy with him who is a retired game warden (gives a nod to Glass) and claims to be a writer.”

“Miller wants this guy given the “A” treatment,” Petrenella said. “You mean…. .” James Prince spoke up. “That’s right, absolutely wear him out hunting and fishing,” Petrenella shot back.

“Does Dave Miller think this guy can take it?” Randy Risher said, trying to show some concern for his fellow man. “Don’t know, but we are gonna find out,” Petrenella said with an evil little chuckle.

So you get the idea of what I am walking into.

Dave Miller and I drove down from Houston and our first stop was at the beautiful Spread Oaks Ranch near Markham, Texas and here we met Vence Petrenella and Tim Soderquist from Ducks Unlimited. I barely had time to unload my suitcase into a lovely ranch house when Tim and Vence grinned and said “Let’s take a ride!”

I am not sure if there is race track competition for UTV type vehicles (Gators and other off road vehicles) but if there is Tim Soderquist will get my vote for driver of the year. Now friends I have ridden on some four wheelers and UTV’s and such. Remember I was a game warden and we did those kinds of things.

Generally though if we were running in the pitch black before dawn we would sometimes turn on a light occasionally to keep from going over a cliff or into the odd gator hole. Not Mr. Soderquist, it was ninety miles an hour and don’t bother with the brakes. I just held on and figured “O well, this must be how they do it in Texas!”

It was a beautiful morning and we took a few teal and a beautiful drake Bufflehead duck. Tim and Vence apologized for the lack of birds but Dave and I had no problems. Late morning we headed back toward the house for a hunters breakfast and other than a brief encounter with a cottonmouth snake it was fine. I didn’t care how fast Tim drove in the daylight, I figured now I could see anything we were going to hit.

I figured on relaxing a while after the meal but O no, Vence said we had to load up and get on down to Port O’Conner on the coast. We had to be down there in time to go fishing this afternoon. No rest for the wicked.

As we approached the quaint little fishing town of Port O’Conner I realized my dream of always wanting to see the Texas coast. Matagorda Bay and Matagorda Island have to be one of the most scenic coastal areas in the world. Miles upon miles of shallow water filled with fish and wildlife make this a sportsman’s paradise.

Once again we barely had time to drop our bags at Randy Risher’s cottage as we were hustled to the dock to get on our fishing boat. Our guide Derek Dick explained we would be targeting “bull” redfish, the largest of the red drum.

Derek and his brother operate Double D Outfitters in Port O’Conner (361-541-9580). Derek was excellent and put us right on the fish from the get go. This was another dream of mine, going after big redfish. Here is what I can tell you I learned about catching bull reds, once you set the hook on one of these fish, all you can do is hang on! The redfish we caught ran around thirty pounds or so and I think they are all muscle.

If you are a fisherman you long to feel a big fish pull on the line. You don’t ever think you will get tired of that. This is exactly what I thought until I caught a few bull reds. After the about the third fish you start to look around the boat in hopes of handing off the rod to someone else. You start to ache in muscles you didn’t know you had, it’s agony and ecstasy. I limped off to bed that night.

Next morning of course we had to be on the water before the sun to get to a duck blind. How we got there needs mentioned. There is a vessel made especially to navigate shallow water you may have heard about, it’s called an airboat. Friends if you never intend to hunt or fish you still need to go to Port O’Conner and ride an airboat. Hurtling across Matagorda Bay with mullet, ducks, and herons jumping all around you is wonderful, doing it before dawn in the dark is special. Once again, I just held on and thought “God Bless Texas!” Take my word for it, just go do it.

Dave Miller had brought along the newest shotgun offering from CZ-USA, a waterfowl over and under 12 gauge aptly named the Swamp Magnum. If you are a duck and goose hunter, or just want a new over and under shotgun be on the lookout for the Swamp Magnum in 2017. All the guys on this hunt loved this gun and wanted to shoot it, I even got to pick it up a few times. www.cz-usa.com

The duck hunting was everything I thought it would be and that means it was good. Waves of Redhead ducks zooming over the blind would warm the heart of any duck hunter. Our guide this morning was Patrick “Pickle” Ragusin and he owns and operates Salty Dog Outfitters in Port O’Conner. (www.saltydogoutfitters.com 361-983-2162)  Pickle is a born waterman and knows this bay like his back yard. Like Derek from the day before he is one of those guides that it is just a pleasure to spend a day with, either in the blind or in the boat.

There was only one thing wrong with the duck hunting and fishing that day. We had to get up and do it all over again the next. Light speed airboat rides, bone grinding fights with heavy fish, and waves of ducks sweeping over your head making that sound which only they can make.

When Mr. Petrenella and his crew scooped up what was left of me into the truck the last morning I figured they had accomplished their mission. Everyone smiled and waved as Dave and I rolled out of the parking lot. They had without a doubt kicked my butt with hunting and fishing on the Texas coast.

I would go back tomorrow.