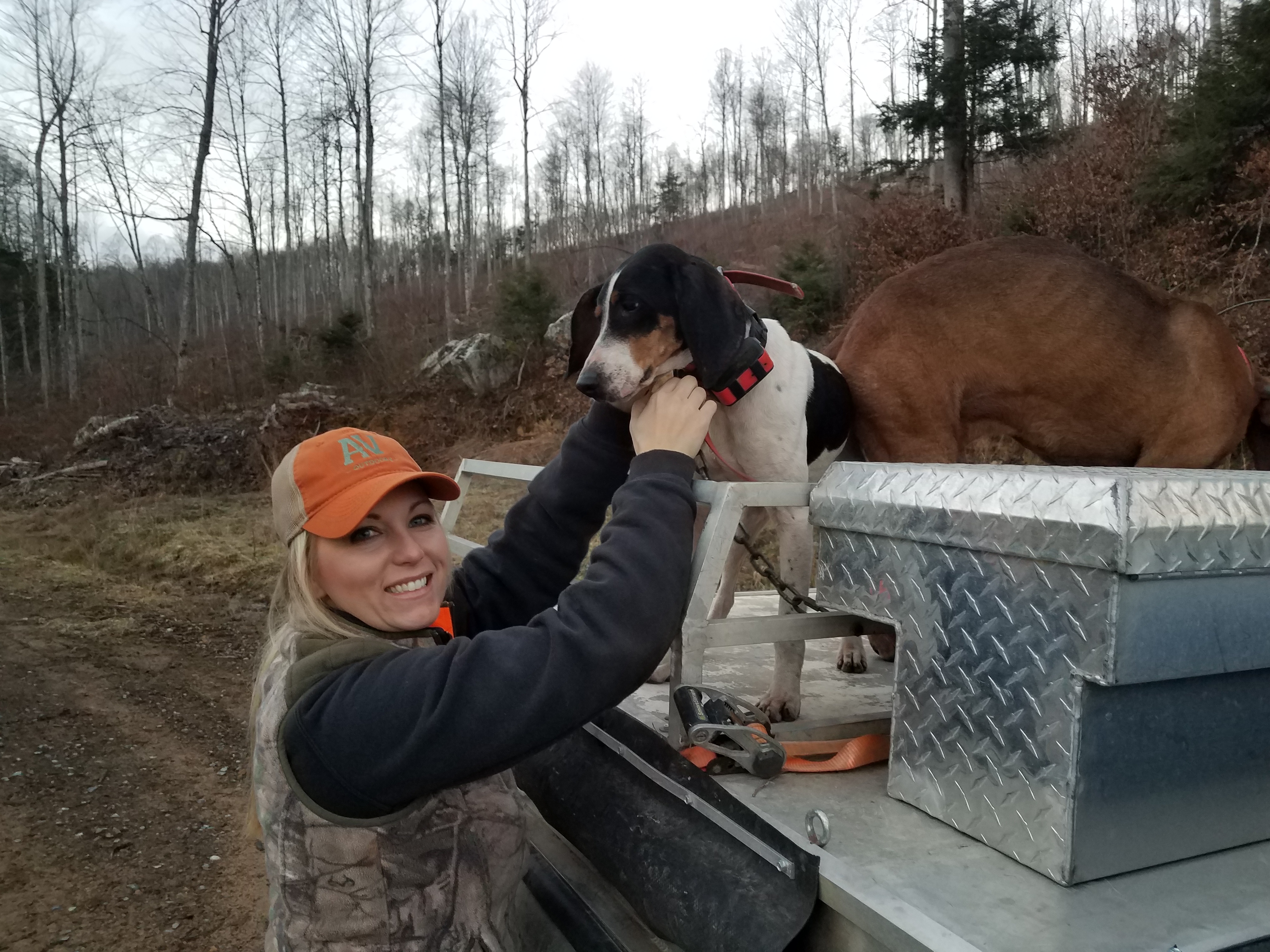 I wanted to quit for about the fourth time. My breath was coming in gasps and my heart was pounding at a rate not seen in recent memory. I tried to concentrate on putting one foot in front of the other and gaining another yard or two on the hateful terrain, all of it straight up. A wall of sapling trees growing about two inches apart blocked my every pathway and grabbed at my legs and arms. Just to add to the fun an intricate web of greenbriers interlaced the saplings and seemed to say “You shall not pass” at every turn.

The group of hunters ahead of me would not wait. They continued their brutal pace and advanced up the mountain. The deafening baying of the hounds was 50 yards ahead and for the moment was the center of these hunters universe. There was a bear in there, a big bear, and they would get up there or die trying. I ignored the pounding in my chest and kept going.

Maybe you have been bear hunting and maybe you haven’t. In the Appalachian Mountains black bear hunting often involves a large group of hunters and an even larger pack of hounds. These are bear dogs, born and bred for over a hundred years for this one kind of hunting. A good bear dog has to have an intense nose to find the coldest bear track, the scenting ability follow it, immense endurance to follow a bear over miles (and miles) of mountain terrain, and then have the courage and grit to mix it up with lots of teeth and claws at the end of the trail.

A true bear dog only wants to do one thing, chase bears. Real bear hunters feel the same way.

Kish Justice is a real bear hunter. Kish is from White Sulphur Springs West Virginia and an episode with a bear in his youth sealed his fate and took him on his path to be a bear hunter. Kish and his hunting partner Bill Kelly from Fenwick, West Virginia, along with several other liked minded hunting buddies hunt a vast area near Richwood, West Virginia. These guys eat, sleep, and breathe bear hunting. These mountains are big and wild and just the ticket for what an ornery old boar bear wants to roam, likewise for a bear hunter.

Enter the lady. A couple years ago I met Anna Van Nostrand (Anna V) at SHOT Show as she was working with CZ-USA, the gun company, promoting their shotguns. She heard about bear hunting with dogs in West Virginia and thought she might want to give it a try. Anna is from Georgia and is as crazy about bird dogs, dog training, and shotguns as the Kish Justice crowd is about bear hunting. Anna was introduced to dove hunting when she was a teenager. She never forgot the rush as she watched birds taking flight for the first time.

There was something special about the atmosphere of hunting birds that stuck with her. Years later, the same guys that took Anna dove hunting introduced her to the German Shorthaired Pointer. After a few years of excuses, she finally gave in and weeks later Anna picked up Merci, her very own gun dog. The love she has for her dog sparked her passion for upland hunting. Years have passed and she and Merci now compete in dog trials, hunt wild birds and enjoy hunting preserves. The camaraderie with other hunters and watching the devotion of their dogs makes every day in the field an adventure. She travels all throughout hunting season with her dogs to experience new hunting ground across the country.

When Anna sold out to the shotgun life, she teamed up with Ducks Unlimited, Quail Forever and Pheasants Forever to spread the importance of conservation and the devotion these organizations have for the outdoors. She constantly attends banquets and hosts events to continue education and promote the efforts of these great causes. Anna is a certified Pistol instructor with the NRA and sporting clay instructor with NSCA. She has spent endless hours helping men and women become more efficient with their shooting. Along with being an instructor, she is a sporting clay competitor herself. She claimed a Georgia State Title in Super Sporting during the 2017 season. ( www.annavoutdoors.com )

Anna V is not just another pretty face in the gun and hunting world, she is a real hunter and a real shooter. Kish Justice, Bill Kelly, and all of their cohorts are the real deal when it comes to bear hunting. I knew it would be an interesting mix.

Kish Justice took a couple of his bear hounds and made a stroll around a large clear cut and before you could say Davy Crockett he was excitedly yelling on the radio that the dogs had jumped a very large bear and the chase was on. When Kish returned to the truck I listened with mixed feelings about the size of the bear. It may not have been a five hundred pounder but it was certainly big enough to be a mean ol’ male bear that was not going to climb any trees.

Large boar black bears you see are known for not “treeing” climbing up a tree when the dogs get close. They stay on the ground and make their way through the thickest brush they can find, fighting the dogs all the while. If you can get close enough for a safe shot, fine, but it is really tough as the hounds are swarming all around him. You move up to one spot; the bear breaks away and goes another hundred yards, or more, and takes on the dogs in a new thicket. You get to the new spot and the same thing happens and you play this chess game all the way up the side of mountain.

This was exactly what was going on as our little band followed Mr. Bear and tried to get Ann V in position for a shot. As noted earlier I just mostly followed, tried to keep up, and hoped I didn’t have to carried out of there. Finally the bear tired of us following him and took the whole show, including dogs, up and over the high ridge above us. The bear went over the mountain.

In the end the bear was bayed by the dogs in the next drainage. Two dogs had already been hurt in this chase and the decision was made for another hunter that was close by to move in and take the shot. Our group of hunters made our way down into that valley to be picked up and I don’t think I have ever been as happy to get in a truck seat.

Ann V is a true sportsman and said she didn’t mind one bit. Not tagging a bear today would just give her a good excuse to come back. I hope she does return for another bear hunt, and I hope she is successful next time, but I know she is not returning just to get a bear rug. The thrill of the chase and the camaraderie of the houndsmen are the main attractions.

Me, I may just wait in the truck next time.