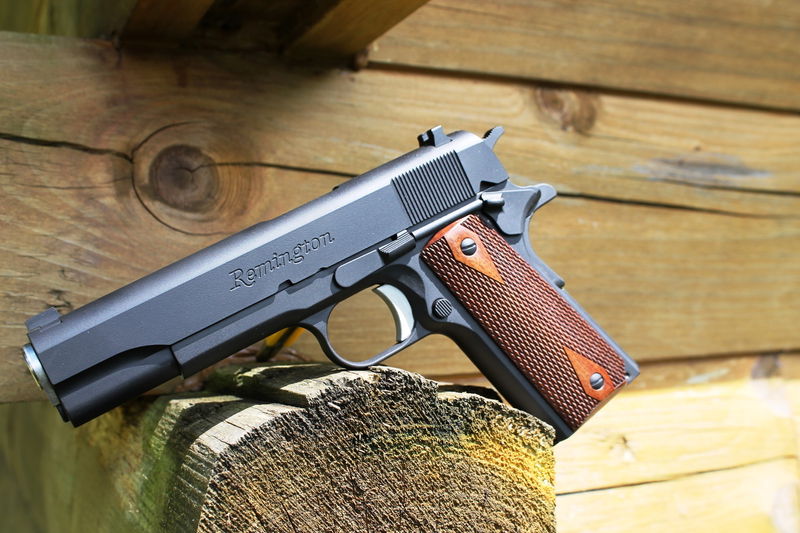 “An unarmed man can only flee from evil, and evil is not overcome by fleeing from it.” – Col. Jeff Cooper

I happen to like guns, and I am certainly not ashamed of it. Now some of you who read this column are thinking, “Yeah, that is readily apparent,” but in today’s crazy world I feel it is just better to be up front about it. There are several classic firearms that have become iconic by virtue of brilliance in design and dependability; many of these guns have intensely loyal and devoted followings, none more so than the Colt 1911 .45 ACP pistol.

Aficionados of the 1911 know that the history of this legendary pistol started long before the year it was named for. Shortly after the United States ran the Spanish out of the Philippines in 1898 the Marines that went ashore started having problems with the dreaded Moro tribesmen who really had not been that chummy with the Spanish either. The Moros were an Islamic sect that were famous for being fanatical, extremely violent and dabbled in slavery and piracy, (sound familiar?)

Soon after the Marines and the Moros started trading hot lead it became apparent that the US forces had a problem with their issued sidearm. The .38 caliber revolvers the Marines were given would often fail to stop the knife wielding Moro’s and in close quarters this sometimes became quite dicey.

The military began to search for a sidearm that would supply more knockdown power and in 1904 the famous Thompson-LeGrande tests were held to find a better sidearm for our troops. At the end of these tests Col. John Thompson uttered the immortal words, “The pistol should not be less than .45 caliber”. I still marvel when I read that. If this happened today Col. Thompson would be subjected to a hail of criticism. The .45 versus the 9mm and other cartridges debate has long been standard fare for gun writers and barbershop bloviating.

Although the military tested guns for several years, in the end the planets lined up and brought together several things that gave us the 1911 pistol. Smokeless powder and the concept of a semi-automatic handgun were coming into vogue at about the same time. The biggest factor however was a little bald guy from Utah named John Moses Browning.

John M. Browning was a certifiable genius and a national treasure. He was raised in his father’s gun shop and learned the basics of firearms engineering early. Browning constructed his first firearm at the tender age of 13 and received his first patent at 24. He is possibly most regarded for his work with automatic and semiautomatic weapons, the Browning .50 caliber machine gun and the Browning Automatic Rifle (BAR) included. To many however, his greatest accomplishment will always be the 1911 pistol.

In one phase of the grueling testing for the military adoption of the 1911 the test weapon fired over 6,000 rounds in a two day period. At one point the pistol reportedly became so hot that bystanders figured it would need a cooling period, Browning grabbed the weapon and dunked it in a bucket of water and immediately started firing the pistol again.

In the end none of the other contenders could hang with 1911. The US Army officially adopted Browning’s .45 pistol in 1911, the US Navy and Marines followed in 1913. The 1911 saw service from 1916, when the US Army went into Mexico looking for a bandit named Pancho Villa, through two World Wars, Korea, and Vietnam.

Post WW II and the peace and prosperity that came with it saw a boom in civilian shooting marksmanship programs. Many ex-servicemen stayed with the 1911 in their shooting endeavors. An entire industry grew up from gunsmiths honing and adding to the 1911 design to make it more accurate. The 1911 became the favorite of many in law enforcement as well.

If you look for old photographs of soldiers or law enforcement officers training with the 1911, you will notice a lot of standing, firing the pistol one handed (as in Bullseye Pistol competition), or the shooters will be crouched and firing “from the hip.” This may be good for pictures, but it is not practical for combat.

One of the first to notice this discrepancy and do something about it was a Marine Corp Officer named Col. Jeff Cooper. Cooper took combat pistol training out of the dark ages and developed a system for fighting that became known as the Modern Technique. Among other factors he taught us a method of a smooth draw, a strong two handed grip on the weapon, quick eye level sight alignment, and rapid fire with accuracy.

Col. Cooper’s teachings are now the basis for firearms training all over the world. Any police officer that has survived a firefight with a handgun in the past 50 years owes him a debt of gratitude. Col. Jeff Cooper went on to help found the International Practical Shooting Confederation (IPSC), and started his own shooting academy, Gunsite, in Paulden Arizona. Today Gunsite is likely the most prestigious firearms training academy in the world. Col. Cooper loved the 1911 .45 and it is no accident that his techniques are well suited to this gun.

If you are one of those lucky individuals that have the original 1911 that Dad or Grandad brought back from overseas, I suggest you keep it, treasure it, and don’t let it get out of your family. Every time you hold it in your hand think about the service it must have seen, the lives it may have saved, and what a great country we live in.

I think John Browning and Col. Jeff Cooper would like that.