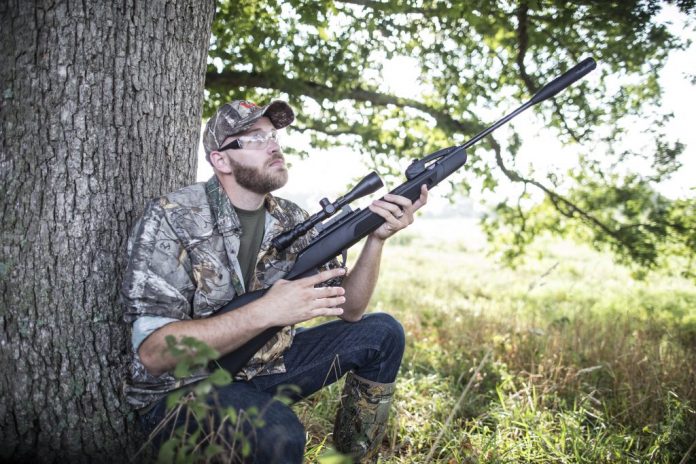 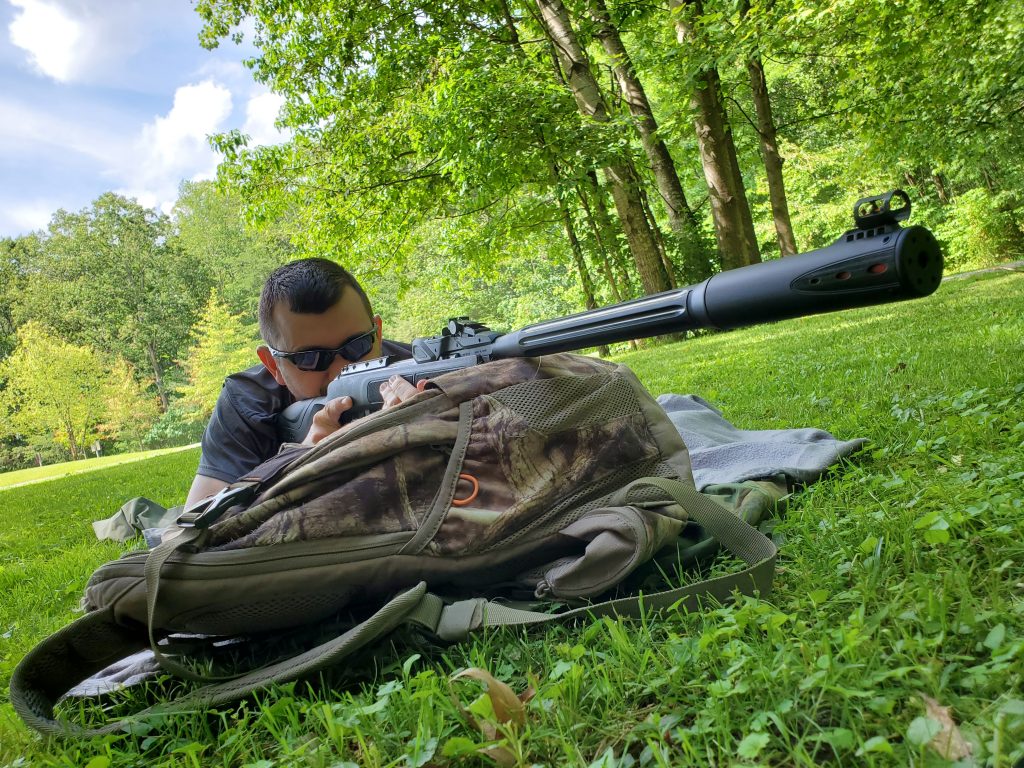 Hunting with an air rifle is cool, it just is. Less noise than a firearm, less worry about how far a bullet, like a .22 Long rifle will carry, and just the satisfaction of hunting and shooting an air rifle. On the shooting part, target practice and “plinking” shooting soda cans, metal flipper targets, and host of other plinking targets is good practice and just plain fun.

It’s supposed to be fun, remember? Some way, somehow, we have strayed from the true path and hunting, and shooting have become less fun. With the pursuit of record book bucks and what is sometimes a grind of several days of turkey season, we can forget why we are really out there…..hunting and shooting are supposed to be fun! An air rifle, like the Gamo Swarm Magnum, is great practice, hones your skills as a marksman, and is very inexpensive to shoot. You and the kids, the whole family can shoot all afternoon for pennies.

Once upon a time when the earth was shiny and new, I did a lot of shooting with open sights. The fact that most of this shooting was done on the banks of Coal River with a Daisy BB gun (a model 25 pump gun to be exact) makes no difference. Like other hill jacks from my area, I progressed from the Daisy to a pellet rifle to a .22 rimfire. I was shooting almost every day, getting plenty of practice, and it was all with open sights. It saddens me that using open sights has become something of an oddity in this wonderful modern age we live in. You can shoot open sights on this air rifle because the magazine lies horizontal to the barrel, is low profile, and allows for the use of open sights, which on this rifle is a fully adjustable rear sight and both front and rear sights are fiber optic. 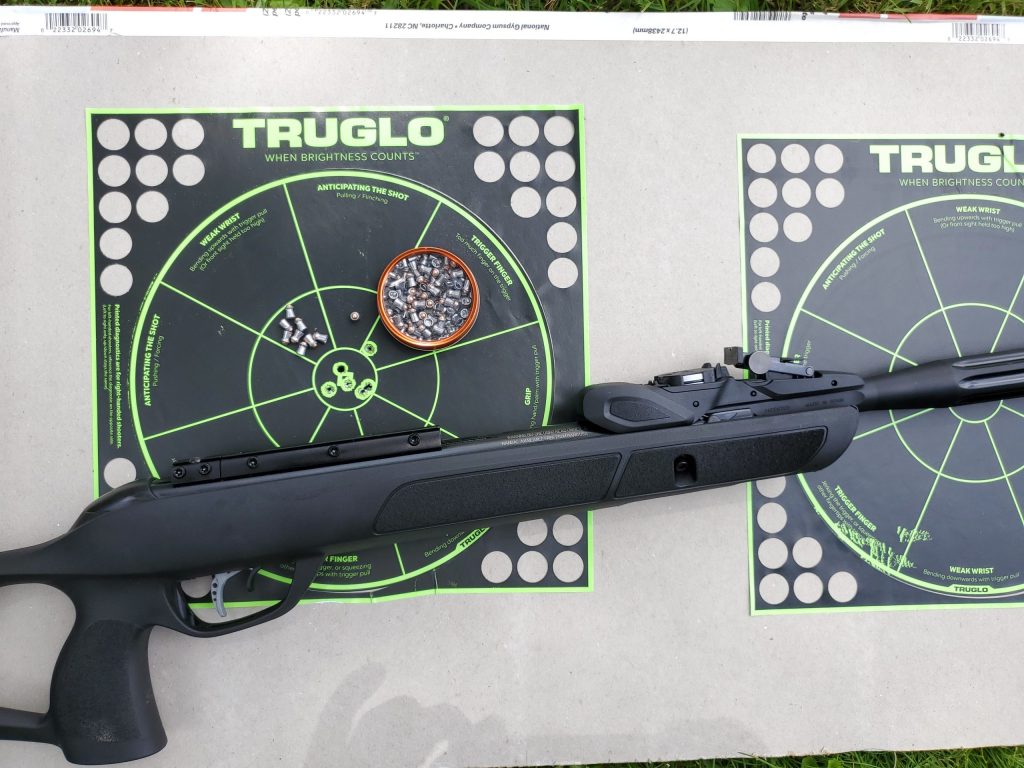 But wait! There’s more! Gamo has had the Swarm technology out for a few years, a unique loading system that is very handy especially for the pellet rifle hunter. By means of a detachable rotary magazine, the shooter loads up to ten pellets and snaps the magazine onto the top of the barrel. The Swarm Magnum requires that you cock the rifle with a break-action system each time, but the magazine automatically loads the pellet. For hunting purposes this is huge. The magazine lies horizontal to the barrel, is low profile, and this allows for the use of open sights, which on this rifle is a fully adjustable rear sight and both front and rear sights are fiber optic. The rifle also ships with a Gamo 3-9×40 scope, has a two-stage adjustable trigger, adjustable from 3.2 to 2.6 pounds of pressure, pretty heady stuff if you think about it for a pellet rifle that has an MSRP of $269.00. 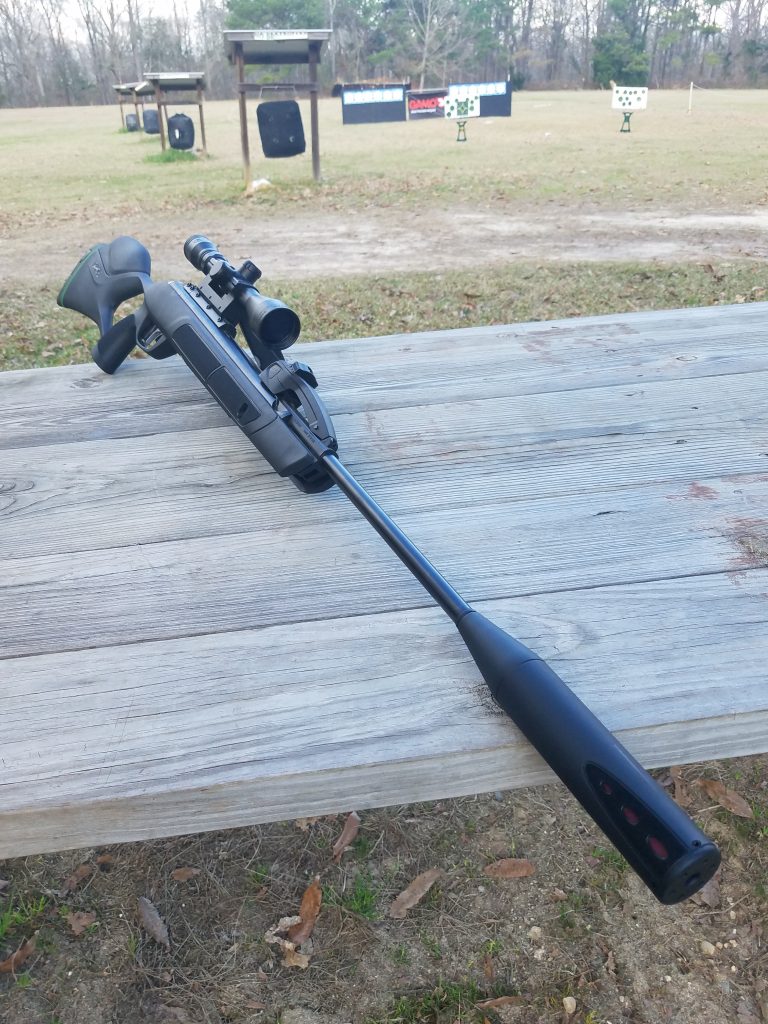 The Gamo Swarm Magnum proves itself at the Squirrel Master Classic. The Squirrel Master Classic is the brainchild of Jackie Bushman, founder of Buckmasters, one of the first deer-related magazines and Outdoor TV programs. Seven years ago, Bushman was looking for a way to attract hunters back to their roots, small game hunting, where a lot of us began this journey as a hunter. Jackie Bushman’s idea was this, have a squirrel hunt in a fun competitive atmosphere. Teams are made up of outdoor television personalities, outdoor writers and editors, a dog handler with a squirrel dog to find the squirrels for you, and most important a young person who is a 4-H shooter.

Gamo Air Rifles sponsored the event and supplied all the hunters with a Gamo Swarm Magnum pellet rifle. The Swarm Magnum is the world’s only ten-shot break barrel air rifle and the 10X Quick Shot magazine allows the shooter to load ten pellets in the magazine, insert it into the rifle and fire ten quick shots before you have to reload. Believe me, we needed those quick second and third shots on this hunt as these squirrels had their running shoes on. Once they started running in the treetops, sometimes with spectacular leaps from tree to tree, you had to be quick or you came up empty-handed.

The competition at the Squirrel Master Classic is handled by counting the total number of squirrels brought in by each team plus the results of an extensive shooting competition with the Gamo pellet rifles and Daisy BB guns. Believe me when I tell you that it is a lot of fun, but the competition is intense. Everyone wants to bring home that coveted Squirrel Master trophy. At the end of the day when all the squirrels and targets where counted I was pleased for a couple of reasons to see the guys on Team Realtree to be named the winner. 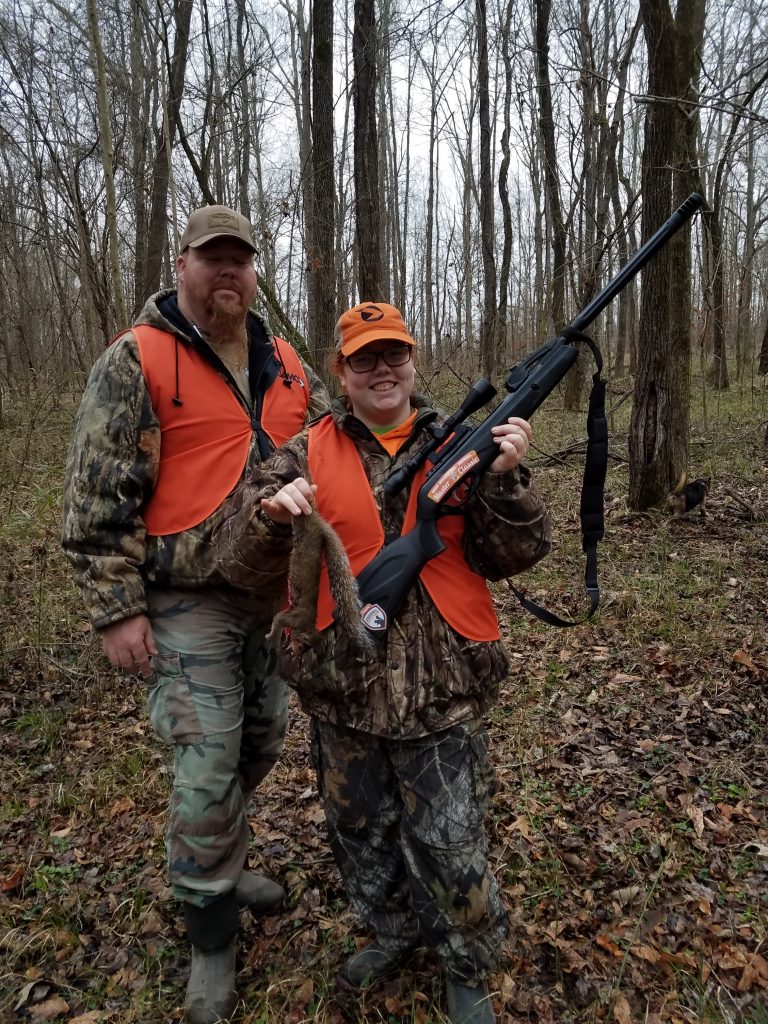 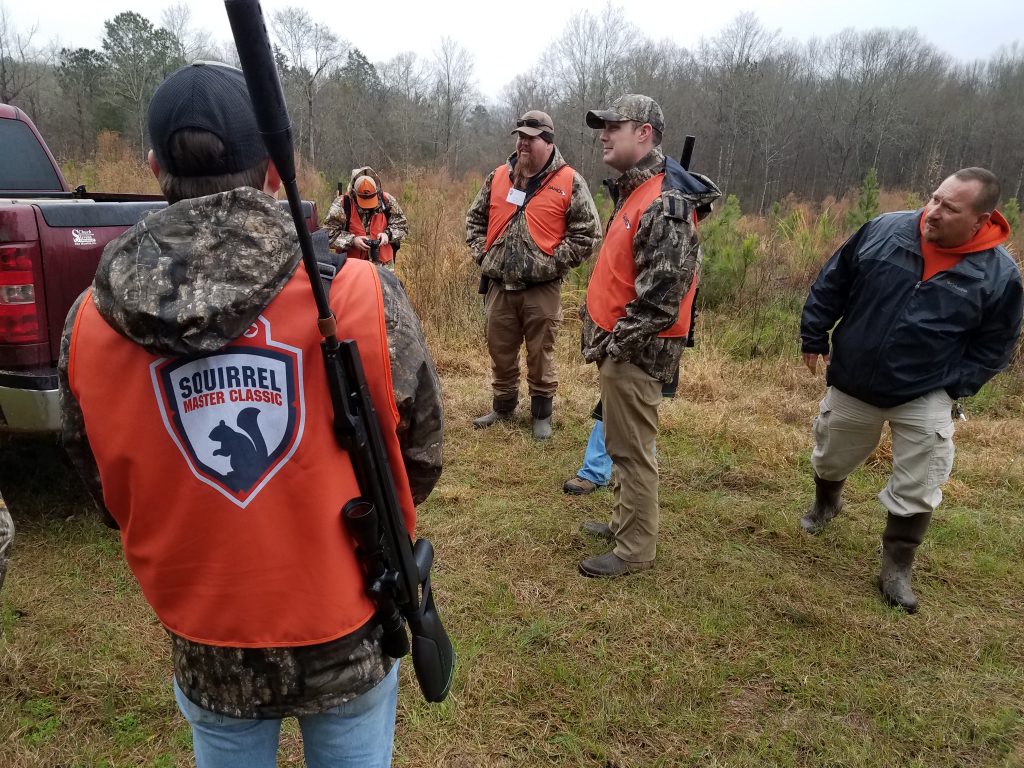 The team for Realtree consisted of the guys on the video production crews, cameramen, and producers; they were fired up when the contest started and worked had to win the day. Also, West Virginia’s own Ronnie Sneadegar from Greenbrier County was the dog handler for Realtree, and his Annie and Hammer dogs worked hard for the win. O yeah, one more reason, I was on the Realtree team and brought home my second Squirrel Master trophy! Life is good!

Do you want to shoot more? Of course you do. Want to shoot more with your kids and teach them the basics of good marksmanship? Absolutely. Get your hands on a Gamo Swarm Magnum G2, it’s supposed to be fun remember? 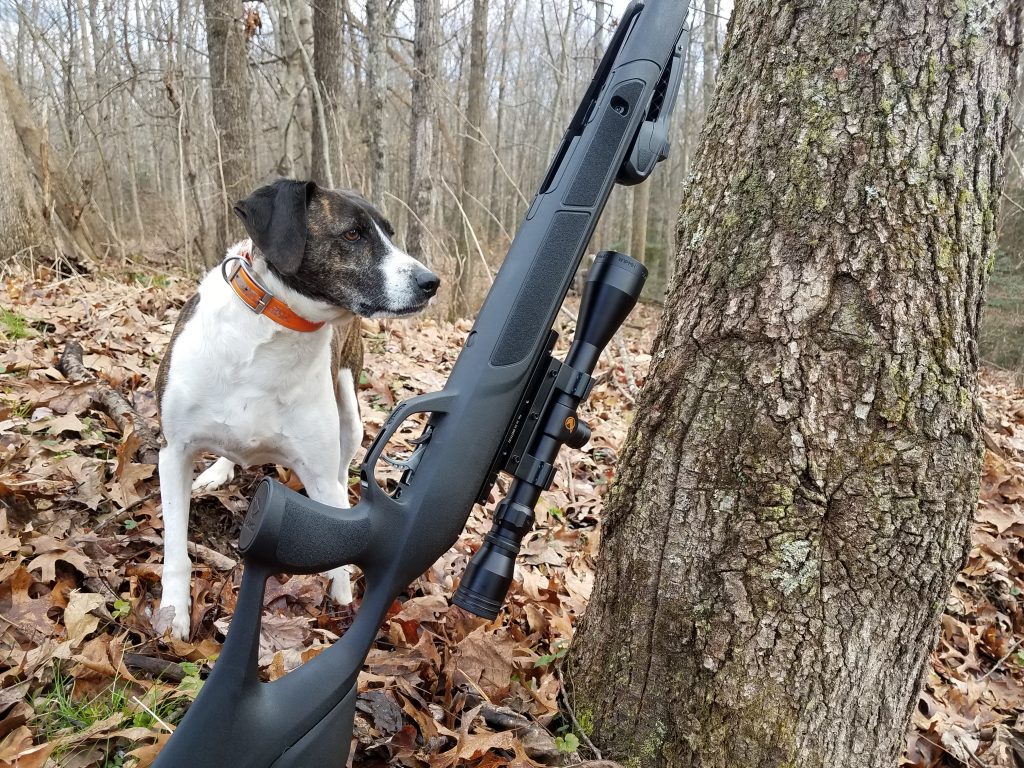 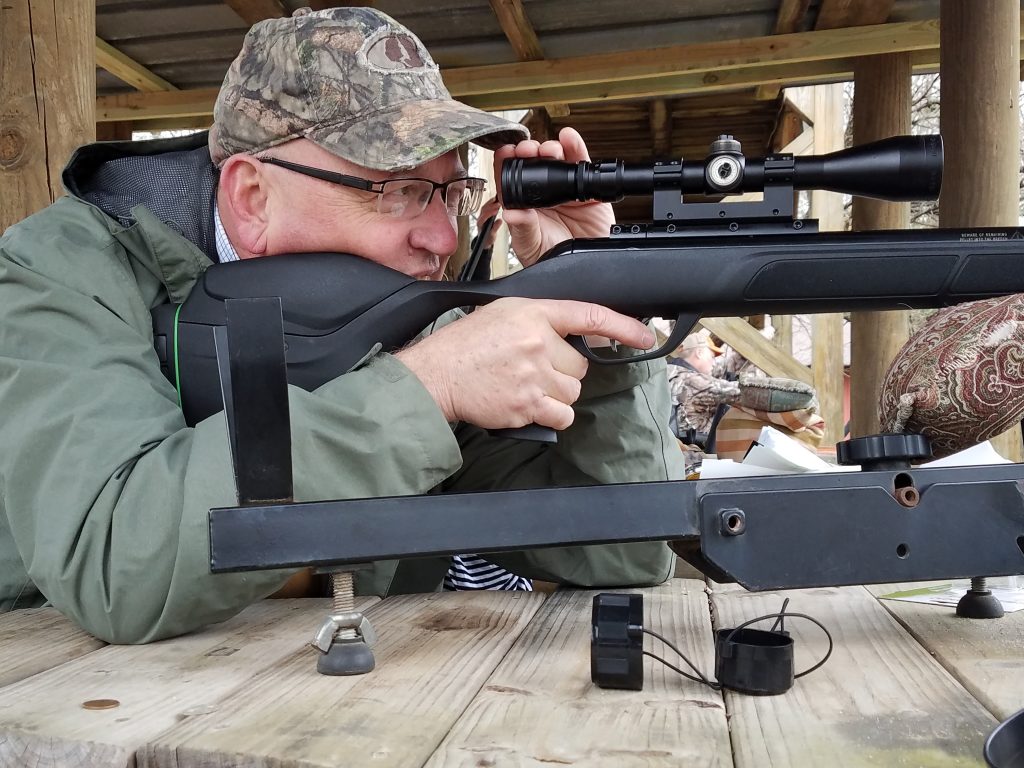